Home › Blog › Top Cities for Fiber Internet in the U.S.

Summary: As remote work continues to become more popular, you may no longer need to live in the same city as your office. The one thing you’ll need? Reliable, high-speed internet, and fiber internet is the best. Check out these cities with the best access to fiber-optic internet, and stay online — no matter where you go.

With remote work likely here to stay, you may be able to do your job from anywhere that has an internet connection. Sounds great, but it means making sure you have great access to fast, reliable internet for work — and fun. Enter fiber optic internet.

With the highest speeds, expanding availability, and most reliable service, it can’t be beat. Let’s take a deep dive into why fiber internet is better and what cities offer some of the best access.

Fiber internet also runs on a dedicated line, so your household is the only one using that access point. Cable internet lines are often shared between multiple homes or an entire neighborhood, leading to network congestion and lowered speeds when lots of folks are using the internet at the same time. That congestion is why you may notice it takes longer for Netflix to load in the evenings, or why you can’t connect to Zoom while your roommates are also on calls.

Think of it like having a fast pass for the express toll lanes — you get to cruise by the most congested part of the information superhighway.

Why is Fiber Internet Faster?

So what makes fiber internet light years ahead of cable? A few things.

First, it doesn’t use electricity. Fiber internet wires are made up of extremely thin glass strands, which, unlike the copper wires used for cable internet, do not conduct electricity. As a bonus, the strands are smaller, so more can fit in a designated area. Instead of sending your data via electricity, fiber sends it using light signals, so it reaches its destination a lot faster.

The equipment on either end can be easily upgraded and replaced without having to dig up and rebury the entire line. This makes fiber a more sustainable — and more affordable — long-term alternative to cable internet.

In fact, the only downside to fiber internet is that it’s not yet available everywhere.

We’ve rounded up the top ten cities with the best access to fiber — making them great for remote workers who need a reliable way to do everything from home. They might not be the metro areas you’d expect.

The financial and technology center of the South, Atlanta is a large city situated in the foothills of the Appalachian Mountains. What does that mean for you? You get the benefits of a cosmopolitan area with stunning natural areas within close driving distance. As a bonus, it’s far enough south you can enjoy warmer temperatures and sunshine without completely giving up seasons. Atlanta is also a young city, with millennials accounting for more than 25 percent of the population. That number jumps to 42 percent when focusing on Midtown, the rapidly-growing area just north of downtown Atlanta. With a variety of coworking spaces across the city, you may be remote, but you’ll never have to be alone.

Charlotte is best known for being a business and financial hub, but it’s also a college town as home to a University of North Carolina campus. The city has a wide variety of sports — NFL, NBA, and MLS teams, plus NASCAR and a range of minor league teams — so you can catch a game in any season. It also claims the title as the city with the most millennial growth from 2005–2015, the demographic most likely to be working from home. If you move to Charlotte as a remote worker, you’ll be in good company to get the job done.

Kansas City, MO, straddles the border on the western edge of Missouri and the eastern edge of Kansas. KCMO is the more populous Kansas City (as compared to KCK, or Kansas City, KS) and is known for barbeque, jazz, professional sports, and its fountains. Topeka, KS, about an hour outside of Kansas City, MO, has been offering a relocation bonus of up to $15,000 for remote or on-site workers and also enjoys great fiber internet access. While Topeka is smaller than Kansas City, it boasts housing prices below the national average and a range of neighborhoods to fit any style preference or household size. 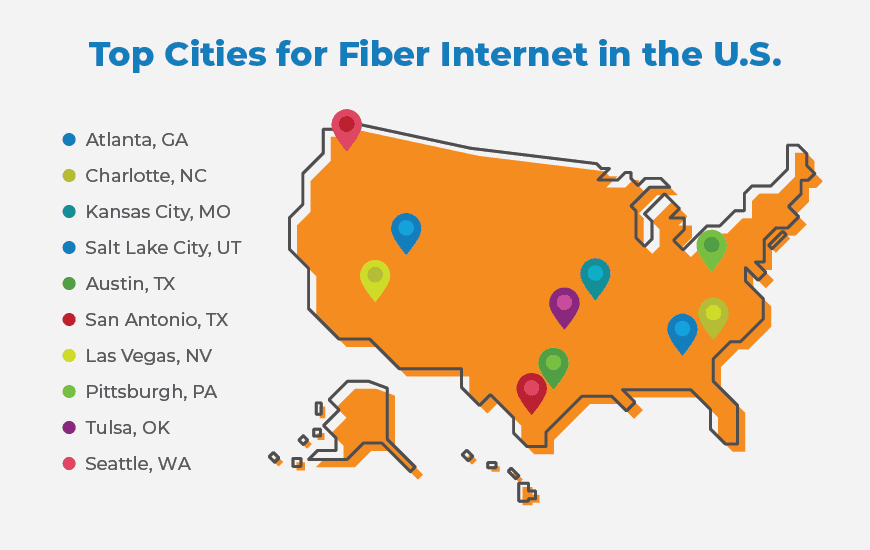 If you love outdoor activities, Salt Lake City (also referred to as SLC) might be the place for you. SLC boasts hiking and biking in local canyons and is only a day’s drive from nearby national parks (Utah has five). Whether you like winter or summer outdoor activities, you’ll be able to find them here in plentiful supply. When you’re not out enjoying nature, you can work from home with reliable, high-speed internet connectivity, or head to one of the newly-opened co-working spaces to enjoy perks like coffee, networking, and conference rooms.

Austin may be the capital of Texas, but it’s also known as the Live Musical Capital of the World. The city is well-known for its small, unique local businesses and has become a center for business and technology since the 1990s. The internationally known SXSW Festival is held here annually boasting the latest in film, music, and tech. Austin is expected to add 10,000 jobs in the next year, with remote workers being a large part of that. No state income tax and mild winters certainly don’t hurt.

What can we say, Texas is a big state with more than a handful of tech-oriented cities. San Antonio is headquarters to four Fortune 500 companies, but many large companies have branch offices here. Worried about walkability? Enter The River Walk, which connects 2,020 acres of public land with a river running through it. This area is pedestrian-only and features restaurants, bars, shops, museums, and more. While remote jobs are less common in San Antonio compared to other Texas cities, that’s changing. Regardless, fiber is widely available even if your employer and you share the same zip code and, of course, there’s no state income tax.

What happens in Vegas doesn’t have to stay in Vegas if you’ve got fiber high-speed internet — sharing fun videos, photos, and facetime calls is easy. While the bright lights of the casinos may immediately come to mind, Vegas offers a hometown feel, too. While the majority of employment in the Entertainment Capital of the World revolves around the hospitality industry, there are also museums, an art district, and three major league professional sports teams. Similar to Salt Lake City, Las Vegas also offers nearby hiking, cycling, and boating for the outdoors-inclined. As an added bonus, Vegas is looking to attract more remote workers to the area, including tech startups and pilot programs.

Pennsylvania’s second-largest city, Pittsburgh is known for its steel and petroleum manufacturing as well as its role in electronics and automotive industries. While the city still recalls its more industrial history with great pride, it’s also become a hub for health care, education, and technology, and is home to several large universities. Duolingo and Seedgrid have HQs here and Zoom has even expanded into the Steel City. Due to its tech job opportunities and fiber internet, Pittsburgh is considered one of the best cities for remote workers.

Previously known as an oil and gas industry hub, today Tulsa’s biggest economic sectors are finance, aviation, telecommunications, and technology. Tulsa’s remote work sector is growing, largely with the help of their Tulsa Remote initiative which gives employees cash, a coworking space, and other perks. The cost of living here is roughly 40 percent below the national average, making it an ideal spot for young professionals who are getting started in life. Plus, with less road congestion and plentiful parking, you can easily explore the city in your downtime.

Seattle, the northernmost big city in the U.S., often springs to mind when talking about corporate HQs, coffee, rainy weather, or the Space Needle. But it’s also a major software, biotechnology, and technical services hub. Seattle recently ranked as the ninth best city for remote work in the U.S., and there are more and more entry-level opportunities signaling a shift to long-term remote work practices. Worried about leaving your four-legged friends behind if you relocate? Don’t be. Seattle is considered the most dog-friendly city in the country.

In the past, your job’s location determined where you lived. That doesn’t have to be the case anymore, and you can get high-speed fiber internet at any of these locations (and many more) for the price you want. Find out how today.