Home › Blog › Which States Have the Best Internet Speed?

Summary: Here are the top states for high-speed internet and how to get faster internet wherever you are. Plus, the five states with the slowest speeds.

But first, a reminder: even if the average for your state is lower than what you want at your own home, your address could have different options available. The most accurate way to find out what speeds you can get is to use our serviceability tool.

What is the average internet speed in the U.S.?

Across the country, the national average internet speed is 119.03 Mbps, according to HighSpeedInternet.com. “Fast” internet is typically considered anything more than 100 Mbps, putting the average slightly above fast. But broadband internet is anything faster than 25 Mbps, as defined by the FCC. 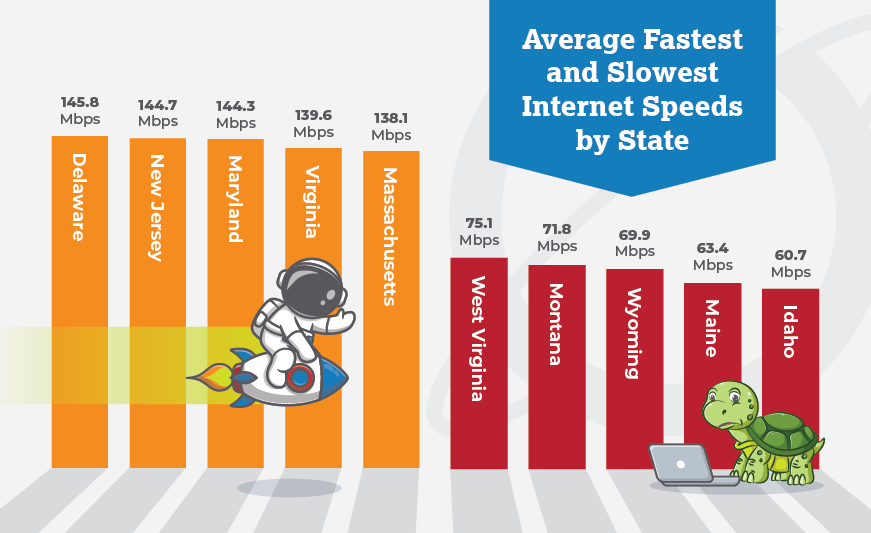 So while the average is 119 Mbps, there are still plenty of people who don’t have access to 25 Mbps. Rural internet access continues to lag behind the access other more populous areas enjoy. In fact, 23% of Americans in rural areas don’t have broadband internet. We’re hopeful that folks all over the country will be able to enjoy faster speeds as wireless home internet takes off.

Which states have the fastest internet?

If you’re looking for the fastest internet speeds in the U.S., you’re looking towards the East Coast. This is partly thanks to a number of large cities in a relatively small geographical area, especially when compared to states out west.

Here are the states with the fastest average download speeds:

If the East Coast isn’t your style, there are a handful of warmer states with average speeds well over 100 Mbps.

And it’s not a coincidence that Atlanta, Austin, and San Antonio are three of the best cities for fiber internet. If that’s where you’re heading, find your fiber internet plan now.

Which states have the slowest internet?

The states that have slower speeds are those with lower population densities. Many internet providers haven’t built fiber networks in these areas because of the high costs when it can be miles between homes.

Here are the states with the slowest average download speeds:

These speeds are higher than the definition of broadband, but they’re not fast enough to enjoy streaming on multiple devices or support an entire smart home.

How can I get faster internet?

If you’re frustrated with slow internet, there are a few things you can do to improve your speed.

Looking for more tips? Check out our guide for improving WiFi connectivity in your apartment or dorm room and figuring out why your internet is slow.

We can help make it easy to move your internet — and we can even send you a great checklist or two. Check out all of our home internet options or give our Internet Experts a call today at 866-383-3080. With coverage for more than 95% of the continental U.S., chances are we can help you out wherever you roam.