Summary: It’s one of the most popular internet plans… but how fast is 100 Mbps? We’ll cover how to know if it’s fast enough for you and whether 100 Mbps is fast enough for gaming and streaming. Plus, find out what type of internet connection you need for your life.

Trying to find the perfect internet speed can make you feel like a bit of a Goldilocks. You want something that’s not too slow, not too fast, but just right. The right connection for you is something that fits your speed needs as well as your budget needs. So while it’s one of the most popular internet plans, is 100 Mbps internet enough speed for you?

Yes, an internet speed of 100 Mbps is fast, but it’s not super fast. It’s slightly above average for most internet users and allows you to stream videos, play online games, or join video chat meetings without too many slowdowns. 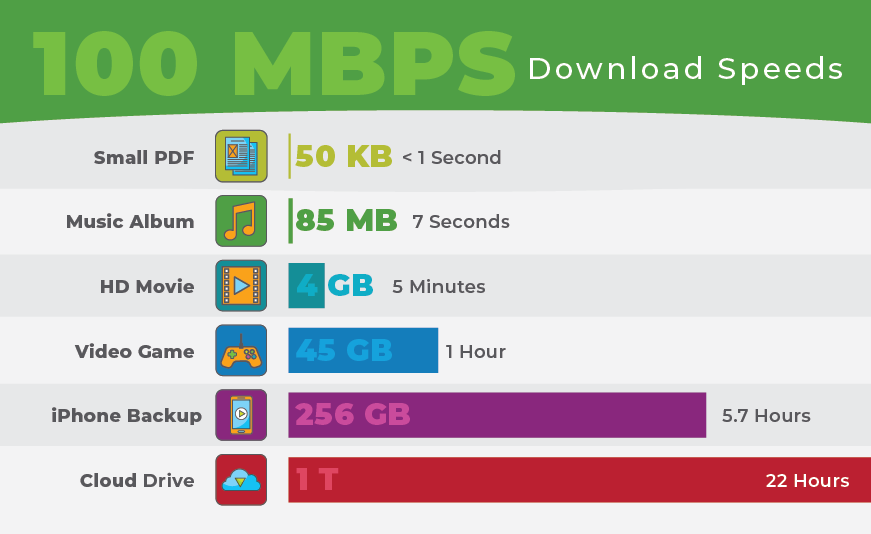 If you hear the term 100 Mbps internet, it means that the download speeds a user can expect are up to 100 Mbps. The actual speeds may be slightly less (you can always check with an internet speed test), but it should be close. Download speed is an indication of how quickly you can receive information from the web, and Mbps stands for megabits per second. The higher the number is, the faster your internet.

Deciding if you should be on a 100 Mbps internet plan is a personal decision and depends on how you use the web. This speed is fast enough to download small files quickly, stream movies in HD, play some online games, or connect a few smart home devices.

That said, if you have a large household where a lot of people use the internet at the same time — or you just have a household full of data-intensive users — 100 Mbps probably won’t be fast enough. If you want to stream video on multiple devices, play intense multiplayer games, or participate in group video calls while other house members are online, you’ll need more than 100 Mbps.

Not sure if you’re a data-intensive internet user? Check out the chart below or use our bandwidth calculator to get an idea of how much speed you need.

If you’re more likely to be downloading information from the cloud, installing new video games, or doing multiple activities at one time, you might need more than 100 Mbps.

Generally speaking, yes, 100 Mbps is a good speed for gaming. But that also depends on what you play, how often you play, and if you’re doing anything else at the same time. A lot of online games will still work with relatively slow internet speeds. But faster speeds generally mean that you’ll have better responsiveness to other players and that you can download large video game files (like updates) or chat on apps like Discord while you’re playing.

If you’re a more serious gamer, you’ll also want to consider the amount of latency in your internet connection. Latency, or ping time, is the lag that happens when a signal is sent back and forth between a device to the network servers. This can slow your controller’s response time as you’re maneuvering around the map. Faster internet speeds can reduce latency, but fiber internet has the lowest latency of any internet connection.

Is 100 Mbps fast enough for streaming?

Yes, 100 Mbps is good for streaming — but you still might need a faster plan. For example, Netflix says you’ll need at least 5 Mbps to stream HD content, and 25 Mbps if you’re streaming in 4K. However, that’s the bare minimum speed you need if you’re not doing anything else, and nothing else is connected to your network.

So if you’re like the rest of us and prone to scrolling social media while the TV is on, all while having your Ring doorbell connected… you’ll need more than what Netflix recommends. If you want to stream in 4K (or stream in HD on multiple devices at the same time) and keep the rest of your smart home devices connected, you may want to look into faster speeds, like 200 Mbps or more. Of course, if 1 Gig (or 1,000 Mbps) speeds are available near you, that’s the gold standard for internet. You’ll never have to worry about adding devices to your network or streaming across multiple devices. There’s almost no limit to what you can do with 1 Gbps of speed.

The Best 100 Mbps Internet Plans for You

Even though internet as fast as 1,000 Mbps is available in some places, there are other areas where 100 Mbps isn’t an option. Rural internet access can be difficult, and roughly 13.4 million people lack access to reliable, high-speed internet.

The good news is that there are some new options coming to rural areas. While some satellite internet plans offer speeds up to 100 Mbps, they also require expensive equipment and long-term contracts. A newer — and more affordable — option is wireless home internet. Wireless home internet offers speeds up to 100 Mbps but it’s contract-free and easy to self-install. It’s a great solution for underserved areas.

If fiber internet is available near you, that’s the best option. Fiber internet is the fastest, most reliable, and most secure internet available. It’s built for streaming across multiple devices, competitive gaming, and those who love smart home devices.

If you’re in need of a movie night — and faster speeds — find out more about EarthLink internet service in your area. With no credit checks, transparent pricing, and the nation’s largest network, we’re confident we can find a great connection for your household.