Summary: Broadband internet is a widely used term, and sometimes it’s used as a synonym for high-speed internet. But while it’s defined by the FCC, a growing number of people argue that the requirements are too slow. Find out how that impacts the expansion of high-speed internet for everyone and what you can do about it.

When choosing your internet plan, you’re probably focused on choosing one that’s the perfect combination of fast enough for you but affordable enough to fit into your monthly budget. You’re probably not as focused on what qualifies as broadband internet.

Especially because for those living in areas with a variety of internet choices, almost everything could be called broadband. But what does this mean? And is it all high-speed?

What is Broadband Internet?

If you’re used to speeds like 1 Gig or even 100 Mbps, this might sound painfully slow to you. But between 14.5 and 42 million Americans lack access to broadband, and it’s particularly hard to get in rural areas.

Good news if you’ve been stuck with slow speeds: There is a provision in the 2021 infrastructure bill that requires providers receiving funding to offer speeds of at least 100 Mbps download and 20 Mbps upload. And if you need help paying for your internet bill, check out the Affordable Connectivity Program and save up to $30 each month.

What Is the Difference Between Broadband and High-Speed Internet?

Broadband and high-speed internet are the same thing. You can have internet that’s not broadband, but that would mean download speeds below 25 Mbps, which is still available on some slower DSL plans. In fact, broadband being defined as high-speed internet is where some of the issues come in: many people don’t feel that 25 Mbps is a fast enough speed for their everyday lives. 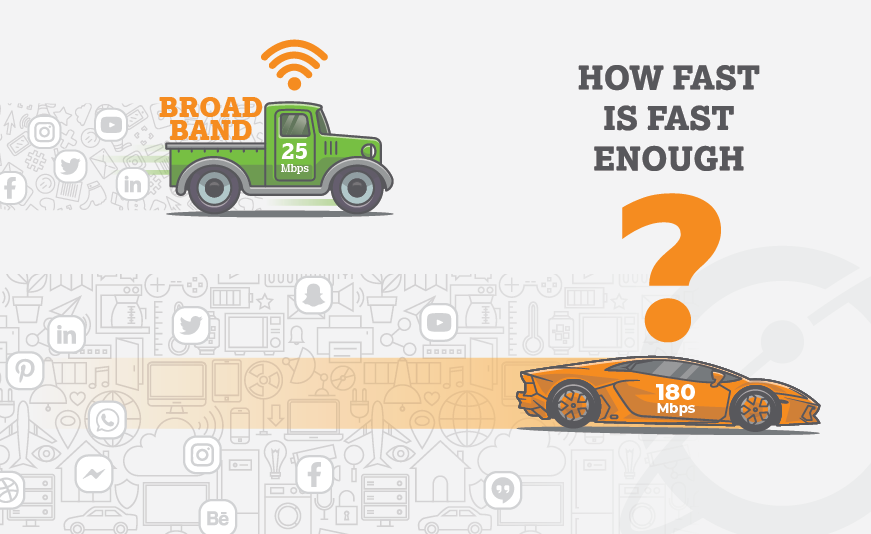 Is the Definition of Broadband Outdated?

Many would argue that yes, the formal definition of broadband internet is outdated. While 25 Mbps will allow you to check your email, post on social media, stream TV, movies, and more, it’s not necessarily an accurate benchmark for how most Americans spend their time online.

Think of it this way: the more data-intensive activities you’re doing online (like videoconferencing, streaming in Ultra HD or 4K, participating in a telehealth appointment, or playing competitive e-sports), the more speed you need to keep up.

Zoom recommends an upload speed of 3.8 Mbps for just one 1080p video — if multiple people in your house are using video conferencing tools simultaneously, you’ll all need more. Of course, you can use a lower graphic quality if slower speeds are available to you, but it could be harder to see what’s happening on screen.

Among the advocates for faster internet? Some United States senators. In a March 2021 letter, the senators argue that federal funding for internet in rural areas should include a speed requirement. The letter states that rural areas should be able to enjoy the same speeds as those in more populated regions — on average, that means 180 Mbps of download speed and 65 Mbps of upload speed. They also point out that the demands for internet access — and reliable upload and download speeds — will only continue to grow as technology advances.

It might sound like everyone is on board to update the definition for our new reality. But others claim that speeds of 65 Mbps or higher aren’t necessary, particularly since the services most people use suggest upload speeds of 5 Mbps or less.

Why Does the Definition of Broadband Matter?

So why does the definition matter? Even if the FCC doesn’t update their requirements, can’t people just avoid the slower speeds?

Unfortunately, not everyone has that choice. The federal government has a goal of ensuring that affordable broadband internet is available to everyone. But if “broadband” itself isn’t a reasonable benchmark, then this goal is guaranteed to fall short.

As explained by the Electronic Frontier Foundation, this is also concerning because it masks the digital divide happening across the country. Depending on how broadband access is measured (by census tract vs. address, for example), the U.S. has achieved universal broadband — something the pandemic revealed to be falling short of the goal.

Is Broadband Internet Fast Enough for Me?

Maybe you live in an area with limited access and you’re thinking that definitions are great and all, but is basic broadband internet actually fast enough for me? And if not, what are my other options?

If you use the internet for simple functions like sending email, checking social media, or reading the news, broadband internet will likely fit your life. At 25 Mbps, you’re able to stream using platforms like Netflix and Hulu, although not necessarily at their top-tier graphics. Plus, you (and your family) likely won’t be able to do anything else online at the same time.

However, if you’re using the internet for things like telehealth appointments, remote work, online classes, social groups that meet up virtually — anything requiring you to send large amounts of information, you may struggle on a basic broadband connection. That’s where fiber internet comes in.

If slower, wired internet is the only option in your area, you might be eligible for a newer technology like wireless home internet. Wireless home internet is more reliable than satellite (and doesn’t require expensive equipment to get started), and it’s faster than DSL. If you don’t often need to use data-heavy activities (like gaming or streaming), but you’d like the option to use something like telehealth, it could be a great way to bridge the gap while internet access across the country expands.

Curious what internet speeds are available near you? Learn more about our home internet services — with more coverage than any other provider in the nation, chances are we’ve got your back.