Home › Blog › What is Last Mile Internet? Learn How It Impacts Your Internet Speed

Summary: If you’re tuned into the latest happenings with internet infrastructure, you’ve likely heard the term “last mile internet.” It’s a fancy name for the connection that runs to your house (the tech equivalent of a driveway, really). And it impacts the internet speed you enjoy more than you might think. Here’s how.

If you’ve experienced slow internet speeds (or you’re tuned in to the recent infrastructure bill), you may have heard the term “last mile internet.” But what actually is that? Does it literally run a mile? We’ve got the answers to all your questions, plus the insight into how this part of the internet fits together with the rest of it. So let’s load up.

What is Last Mile Internet? 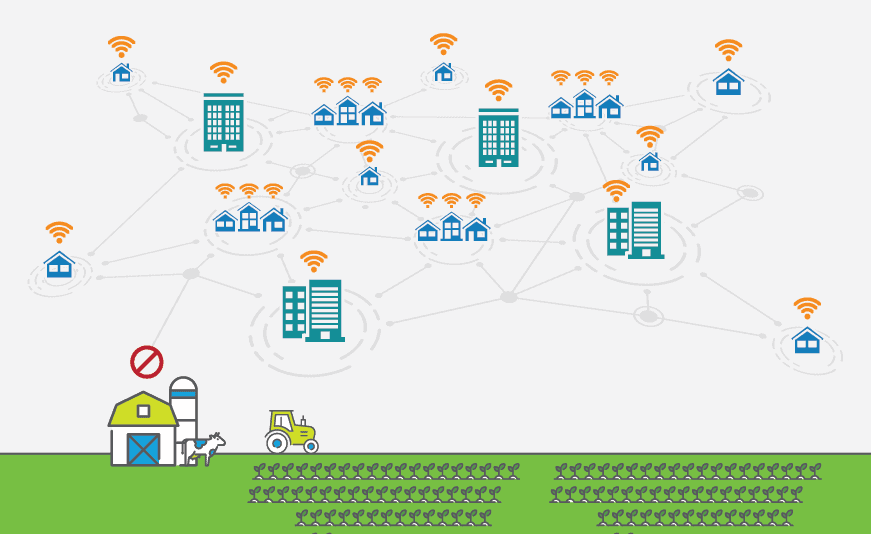 You can think of it like driving. If you’re going from your house in Florida to your parents’ house in Michigan, you’ll probably be taking the interstate for most of the time (hello, I-75). But eventually, you’ll have to get off at an exit and drive through a town to get to the actual house. Once you’re off the interstate, you’ll have to drive slower — maybe there are stoplights or stop signs, speed bumps, reduced speed limits, or just twists and turns in the roads you have to watch out for. It’s a small portion of your overall journey, but it requires you to go more slowly.

The “last mile” internet might not actually be a mile, but it is that portion that connects your residence to the main part of the network — sort of how your driveway connects your house with the main road. With that, let’s get into internet infrastructure.

Internet Infrastructure and the “Last Mile”

When purchasing your internet plan from a Tier 3 provider, you’ll typically get to choose from a variety of speeds. Your speed determines how much data can be transferred in a given amount of time. As our online lives require more data (think: video calls, file sharing, streaming entertainment), we also need more internet speed to keep up.

What are Internet Exchange Points?

Now that you’ve got the last mile piece down, let’s zoom out and look at internet exchange points. An internet exchange point is where the connections change between Tier 3 competing providers (like AT&T or Xfinity). This is also where speed bottlenecks are more likely to happen, either due to exchange point placement or lack of peering agreements (when providers agree to freely exchange their traffic with each other for mutual benefit).

Internet exchange points make the web work like it’s supposed to — but they can also slow it way down.

Net neutrality is a complicated topic, but it boils down to this: the idea that internet service providers (ISPs) or governments should provide access to all content equally regardless of the platform, user, app, device, or information. (Want to know more? We’ve got all the details on net neutrality.)

For last mile internet, it means ensuring that ISPs aren’t charging different rates for different content, favoring their own content, or blocking competitors. Net neutrality debates come down to this specific section of the internet infrastructure and centers on ISPs considering networks a public utility.

As you probably noticed, the last mile is a problem for internet, and where most speed and connectivity problems happen. When network performance is lacking, users become frustrated and tend to leave the page — quickly. For example, 81% of internet users abandon a page or video if it does not load immediately, according to Datapath.io. For companies, that means lost reach or revenue. For users, it means frustration and, likely, choosing a different website to get that information from.

Network performance directly impacts how we use the internet and what pages we frequent. In other words, it’s something that just about every company should care about.

Although the last mile connection is important for every internet user, it’s got an especially large impact on rural areas. Because ISPs have to invest in the infrastructure to reach individual homes, they get a larger return on their investment in densely populated areas, like cities and suburbs. Areas with geographic barriers (like mountains) or low population density (requiring miles of internet lines for a handful of households) are less likely to be appealing to some internet providers.

That translates to 23% of Americans living in rural areas without access to broadband internet. Between the new broadband internet infrastructure bill and technology like wireless home internet, we’re hopeful for rural and last mile internet solutions.

Whew! We feel like we just ran a mile after going over all of that. Last mile internet might be a small part of the overall internet ecosystem, but it has a big impact on our everyday lives. At EarthLink, we’re committed to finding the connection that works best for you — whether you’re looking for urban or rural internet.