Home › Blog › What is Net Neutrality?

Summary: Net neutrality is the idea that internet service providers or governments should provide access to all content equally regardless of the platform, user, app, device, or information. That means not favoring their own content or blocking their competitors. But what does that mean for you? And why is there so much debate? Let’s take a look.

Net neutrality laws impact most Americans, but they can be confusing for many of us. Advocates point to the importance of fair and equal access to internet-based data, while opponents say net neutrality can limit consumer options and hinder innovation. We’ll break down what it means for you and your high-speed internet connection. Let’s start at the beginning.

What Does Net Neutrality Mean?

Net (or network) neutrality is the idea that internet service providers and government entities should treat all content equally, and everyone should have an equivalent ability to get access to that content. That means that a provider wouldn’t be able to give some apps or sites the fast lane (such as ones they own) while speed throttling or blocking others.

An important note: these kind of blocks aren’t exactly the same as speed throttling due to data cap limits, although internet data caps did become more common when net neutrality laws changed. We’ll get into that in a minute.

Net neutrality would require that ISPs provide a level playing field of data access and speed for all users to all pages or programs — assuming the websites being accessed are lawful. Illegal sites are another story.

Proponents of net neutrality argue that it can lead to more diversity and competition among internet service providers in your area since telecommunications companies of all sizes can enter into the marketplace and offer new technologies and services.

How Has Net Neutrality Changed?

The term net neutrality was coined in 2002 by Tim Wu, now a law professor at Columbia University. He pressed for a rule that would ensure non-discrimination among internet applications. At the time, some carriers were banning users from accessing VPNs and others from WiFi routers — things that are cornerstones of how we safely use high-speed internet service today.

From 2005 to 2014, there were legal debates back and forth over access, devices, and throttling of certain websites, software, and pages.

In 2015, the FCC passed a net neutrality order to regulate internet access like a public utility. It made internet service providers a “common carrier,” a category that other utilities like water, phone, and electricity fall under. That regulation also prohibited ISPs from throttling internet speeds to make certain content load slower, creating fast lanes for higher-paying customers, or blocking specific sites or apps. Some argued that this rule exceeded the FCC’s authority.

Then, at the end of 2017, the 2015 ruling was reversed. The new ruling essentially dropped the common-carrier status for broadband providers and removed restrictions around blocking or throttling content. Currently, the Federal Trade Commission (FTC) is charged with reviewing net neutrality violations. 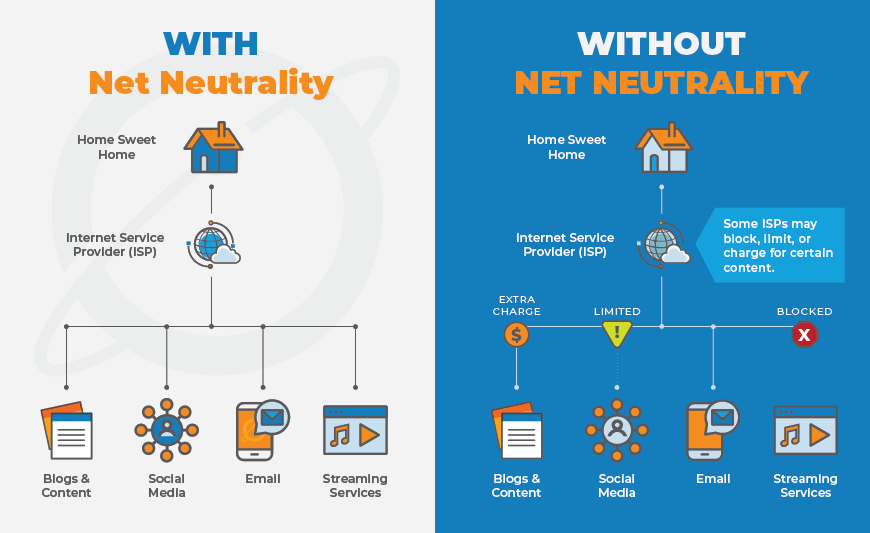 What Net Neutrality Means for Your High-Speed Internet Connection

If net neutrality issues still seem distantly related to how you use the web, let’s look at how it might affect your high-speed internet service.

Data caps are a restriction on how much information you can send and receive through your internet connection. Data-heavy activities like streaming and gaming can cause users to quickly approach data limits. Once the limits are reached, internet service providers can slow your connection or add a hefty fee to your next bill. While this kind of penalty already existed for many mobile phone plans, it’s become a more common practice for residential internet since the repeal of net neutrality. However, it is still possible to find a provider, like EarthLink, with no internet data caps.

In addition to website speeds, some internet service providers have found ways to bundle internet services with other related products. This can include things like free streaming platform subscriptions from a shared parent owner or including the data used to stream movies, music, or TV shows from those platforms in their data limit.

Why is Net Neutrality Important to Understand?

Why do you need to know about net neutrality? Most Americans only have one or two choices when it comes to their internet service provider. So, even if they’re unhappy with their service, there’s not always another viable option. Advocates for net neutrality say that more competition from smaller ISPs could change that.

Proponents of net neutrality also worry that internet packages could look like cable packages in the future — tiered channels and information, with more access to what’s on the internet costing consumers more money. On the other hand, some people believe net neutrality has stopped innovations in the telecommunications industry and closed the door to new technologies.

It’s a complex issue, but knowing more about net neutrality can help you make more informed decisions about internet for you and your household.

Remember, EarthLink is committed to providing an Open Internet for our customers. We support an internet that is transparent and free from blocking, censorship, and discriminatory throttling.

You can always count on EarthLink for high-speed internet options with no data caps.