Summary: Getting fast, reliable internet in rural areas — or many places outside of the city — can feel like a nearly impossible task. But with these tips, it just got easier. We’re comparing the best internet options for rural areas. So, dive in and find what might work best for your household. Short on time? Just give our Internet Experts a call at 866-383-3080 and they’ll find the right connection for you.

For those living in more rural (or just harder-to-reach) areas, finding internet access can be a challenge. In fact, 23% of Americans in rural areas don’t have access to broadband internet. Broadband is defined by the FCC as at least 3 Mbps upload speed and at least 25 Mbps download speeds. If you’re using cable or fiber internet, you’ve almost certainly got broadband speeds.

But that’s less guaranteed for other types of internet connections. The good news is that the options (and speeds) for rural internet keep expanding. We’ve got you covered by comparing the three top options here.

What are the Three Best Internet Options for Rural Areas?

We’ll be focusing on the three best rural internet options. In other words, while dial-up internet may still be available at your address, it’s not the best option, so we won’t go over it here.

Wireless home internet is a relatively new technology that has the potential to completely change rural internet access. Instead of using wired internet access, it uses the strongest signal from the cell phone towers nearby, which are typically plentiful even in less populated areas. If you live in an area where 4G LTE is widely available, you’ll be covered with a high-speed 4G home internet connection. It’s a more reliable alternative to satellite internet in rural areas that’s also faster than DSL. 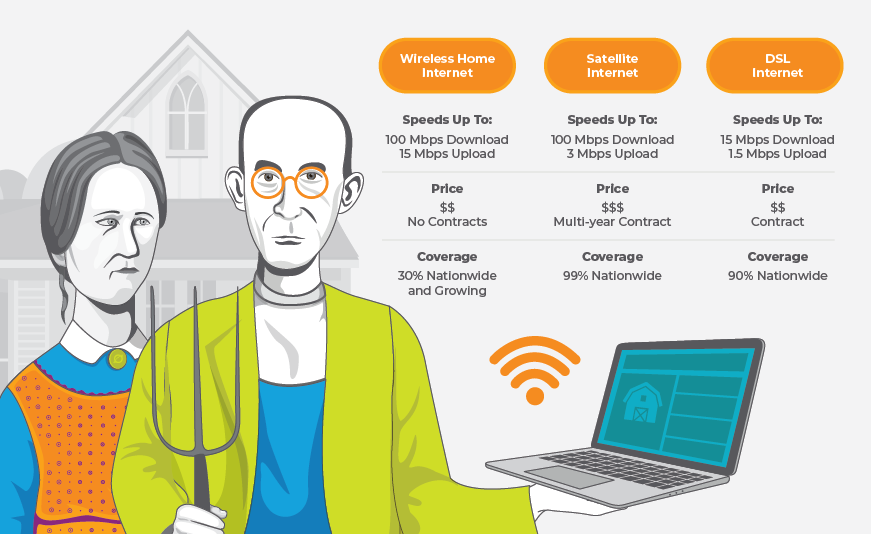 The biggest difference is that you choose a data plan for wireless home internet instead of a speed because you’re always connected to the fastest available speed. It’s easy to set up, too — no installation team or underground wires required.

If wireless home internet isn’t available near you yet, satellite internet could be the right fit. Satellite internet has been around for quite a while and is available across 99% of the U.S. It uses a dish that’s installed on (or near) your home to send and receive information from a satellite in space — a process that takes less than a second. It’s more available than DSL and faster, too.

When setting up your satellite internet, you will need a professional to help. The equipment can be expensive, but you have the option to lease or buy it outright, depending on what makes more sense for you.

We don’t recommend opting for satellite internet if you’re moving soon — it typically requires longer contracts and you could be hit with an early termination fee.

If satellite isn’t a great option for your household and wireless home internet isn’t available, DSL internet might be a good fit. DSL is super reliable and uses a dedicated line, so you don’t have to share your connection point with neighbors. In other words, you can avoid a lot of network congestion that cable internet users often deal with.

While wireless home internet is the newest (and often fastest) type of technology, you’ve got a few options if you’re in a rural area. Now that you know the basics of how it all works, let’s look at what to consider when choosing your internet.

The tough thing is finding a service that checks all three boxes. While it depends on your provider, location, and budget, we can offer a general overview. The more data-intensive activities you do (like streaming, sharing photos, or video calls), the more speed and data you’ll need.

You understand what your options are and the benefits of each. Now find out how to learn what‘s available near you and get answers to the most frequently asked questions.

How to Get Internet in Rural Areas

Getting internet in rural areas can still be difficult. We’re hopeful that that’s changing, especially with the 2021 infrastructure bill putting more money behind expanding rural coverage. The cell towers that are used by wireless home internet are a great start because it doesn’t require any new infrastructure to be built (or wires to be put in the ground). Because it’s expensive to put down new equipment, internet providers are more likely to do it in urban areas where it can reach more people.

That said, it’s not impossible, and it’s getting better all the time. You can also use a serviceability checker to see what’s available near you or call our Internet Experts at 866-383-3080 to get started today.

Still Have Questions About Your Rural Internet Options?

We’ve got answers to your most frequently asked questions.

What is the Fastest Rural Internet Option?

The fastest rural internet option is wireless home internet. It has comparable download speeds to satellite internet but is expected to get faster as 5G becomes more widely available. It also has lower ping times and less latency than satellite internet, making the experience faster for users.

What is the Most Reliable Rural Internet Option?

DSL is the most reliable option because it’s a wired, always-on connection. However, if comparing the two faster options, wireless home internet is more reliable than satellite internet.

What’s the Difference Between WiFi and Wireless Home Internet?

What is Latency and How Can it Affect Me in a Rural Area?

Also known as ping, latency describes how much time your device requires to send signals to a server and receive the response. This is basically a time delay or lag, so the lower the number is, the better. It’s more likely to be encountered in rural areas because it’s so common with satellite internet connections. High latency can lead to dropped or spotty video calls, losses in a video game, buffering videos, and more.