Home › Blog › How is Precious Metal Used in Smart Devices?

Summary: We’re all trying to be more eco-friendly, whether that’s using energy-efficient smart homes or traveling with a reusable coffee mug. But you might not realize that your smartphone (and most other tech, too) requires precious metals to work. Or that the United States throws away more than $7 million in raw materials every single year. So let’s find out why precious metals are so important, and how we can make them last longer.

You might consider your cell phone (especially a new cell phone) precious. It’s why you keep a case on it, hold your breath when you drop it, and throw it in a bag of rice when it gets wet.

But did you know that your smartphone also requires precious metals from the Earth? That’s why cell phones can have a significant impact on the environment — that’s why tech recycling is more important now than ever before.

What is a Precious Metal? 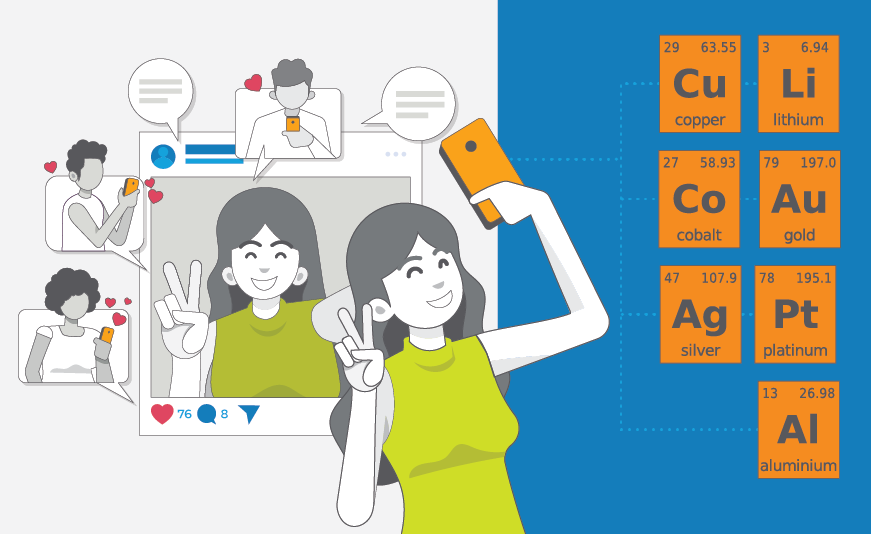 But since they all start out in the ground, that means they need to be extracted.

How Are Precious Metals Extracted?

There are three main ways to extract precious metals from the ground, according to the United States Geological Survey:

If the precious metals are already being used in equipment, like a phone, the process is a bit different. The three main ways to reclaim precious metals from electronic waste are:

So no matter where the precious metals are coming from, it’s a lot of work to be able to use them. But they play an important role in how we use devices today.

What are Precious Metals Used for in Tech?

Smart devices — or tech of just about any kind — use precious metals to function.

Copper is used for wiring since it’s an excellent conductor of heat and electricity. Lithium is used in (you guessed it) lithium-ion batteries, which are used in most modern phones. Cobalt can be used to coat copper wires in order to make microchips more reliable. Gold and silver are used in circuit boards, along with other materials like copper and palladium.

Aluminum is the most popular material in your phone, though, as it’s used to make most of the outside cases.

The same holds true for most other devices, like your laptop or desktop computer. Precious metals are used to power the circuitry, create microchips, and quickly transmit data across all the internal components. Plus: gold is extremely malleable, so it’s easy for manufacturers to roll and shape into thin sheets.

It’s great news for manufacturers because all these materials are durable, fast, and efficient. But when people throw them away (or companies don’t reuse them), it requires going back into the earth and digging it up again.

Yes! Recycling your technology and unwanted devices can help recover some precious metals. And while it does take a lot of work to get them back out, it is cheaper and more eco-friendly than extracting them from the earth. When electronic waste is thrown away, roughly $7.49 billion in raw materials are lost each year. And in the U.S., each person produced about 46 pounds of e-waste per year — that adds up to a total of 7 million tons.

But when electronic waste is recycled, everyone can reap the benefits.

For every 1 million laptops that get recycled, more than 3,500 homes in the U.S. could be powered for a year.

And recycling 1 million cell phones? That recovers more than 35,000 pounds of copper, 772 pounds of silver, and 75 pounds of gold. Talk about buried treasure!

Plus, you can get paid to recycle your unwanted devices. Many major companies have trade-in options where you can either receive credit towards a new device or a gift card to use later. Or, you can simply recycle something that you don’t want sitting around and collecting dust anymore. Check out the details for Apple and Samsung or do a quick search of your favorite manufacturer.

However you’ve used your tech, you can thank precious metals for powering it. And when you’re ready to move on to the next big thing, recycling or reselling your old device can save you money and help the planet. That’s a win-win. And if you’re looking for fiber internet with speeds up to 5 gigs that fits your life, EarthLink has your back. With no fiber internet data caps and a multitude of plans… well, we’re pretty rare and precious ourselves.