Summary: It seems like everyone is talking about 5G — maybe because it promises to deliver speeds far faster than 4G LTE, and change our lives (again). Learn how the two networks relate to one another and why 5G will differ depending on where you live.

If you’ve bought any new device recently, you’ve probably heard “5G capable!” as a selling point. But what does that actually mean? And is it something you really need to be thinking about? For that matter, what was wrong with 4G?

If you’re not clear on the differences between 4G and 5G — or how much of a difference it will actually make in your everyday life — let’s break it down for you. (Hint: the G stands for generation.)

4G became available during the early 2010s and replaced its predecessor, 3G, with speeds that were up to 10 times faster. If 4G speeds now seem blah, just think back to 2008 and remember how long you had to wait to load anything on your phone — if your phone had internet capabilities at all! Those days were all texting your updates to Twitter and asking ChaCha because you couldn’t talk to Google. 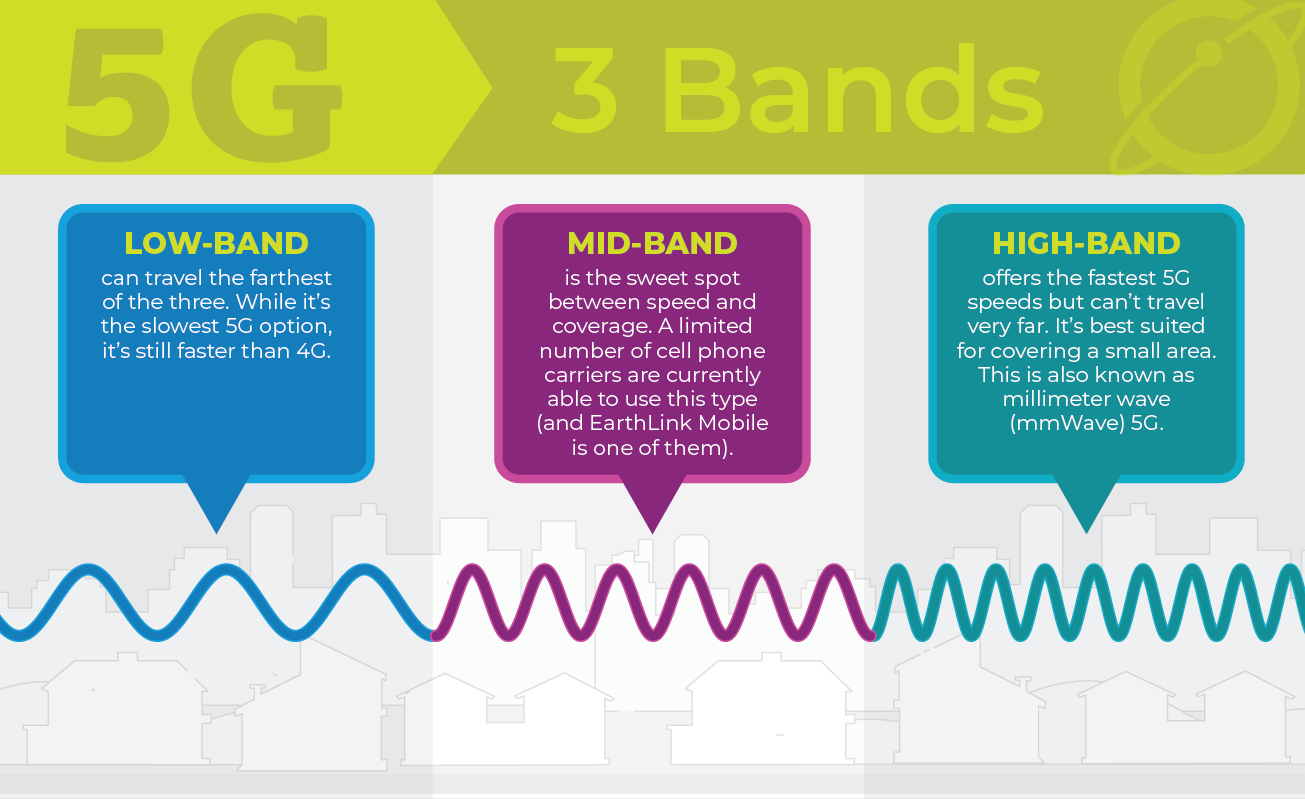 4G speeds have paved the way for apps that require rapid, real-time data transfers like high-quality video calls and rideshare services. You may have also heard 4G referred to as 4G LTE in recent years. We’ve got the scoop on the difference.

LTE is a specific type of 4G that can deliver faster speeds. It’s also referred to as 4G LTE, which stands for “fourth generation long-term evolution.” This is used by just about every smart device these days, making standard 4G speeds feel outdated. To a certain extent, it is. The little 3G that remains is being phased out in 2022, so 4G will be the slowest available wireless speed, while LTE will be the most available.  LTE service has been available to more than 90% of the United States since 2013, so you probably don’t even think about the distinction between 4G and LTE anymore.

So, if LTE is so great, why is the tech world excited about upgrading to 5G?

5G is – you guessed it – the fifth generation of mobile technology. Just like 4G evolved into 4G LTE, 5G also has different bands that deliver a variety of speeds: low-band, mid-band, and high-band. Each type has unique benefits and can be used for different purposes.

In addition to increased speeds, 5G promises reduced latency making it ideal for gaming, streaming, virtual reality, self-driving cars, and more. Latency is the delay between your physical action and the action on the screen — the lower it is, the better.

How Much Faster is 5G than 4G?

So just how much faster is 5G, really? Let’s put it this way: while 4G wireless networks typically offer 30 Mbps on a mobile device, 5G boasts speeds anywhere from 60 Mbps to 1,000 Mbps (aka 1 Gbps) depending on where you are.

Smaller towns and less densely populated areas will probably be using low-band 5G, so speeds will only be slightly faster than 4G LTE. In urban areas where high-band 5G is available, users will see speeds more than ten times faster than 4G.

High-band 5G is so much faster because those frequencies haven’t been used in the past, so there’s literally more room for everyone on the network. While mmWave 5G isn’t widely available yet, that could change over the next few years as technology and infrastructure continue to evolve.

Why are 5G Networks Necessary?

Sure, we’re all online more than ever these days, but why are 5G networks actually necessary?

It’s not just for the increased speed.

5G opens the door to more interactive experiences in stadiums, whether for sporting events or concerts. But it also allows for the possibility of autonomous cars reading maps and traffic patterns in real time, more advanced smart homes, advanced telehealth, and even remote surgeries. But what 5G is really doing is paving the way for advances we can’t even imagine yet. Just like we couldn’t have predicted real-time location sharing when 4G was first being built, we’re not sure what all 5G holds in store for us. But we’re excited to see where it leads.

If you’re ready for faster internet, too, switch to EarthLink Fiber Internet. We’ve got speeds up to 5 Gigs, no data caps, and no speed throttling. That’s a win-win-win.