Home › Blog › What is Fiber Internet?

Summary: Fiber internet is the latest in wired internet technology and it is revolutionizing speeds. By using thin strands of glass to send and receive data, this type of internet is light years faster than copper cable connections. Fiber is the future of the internet, and it can change how you connect to everything from school to work to friends. Let’s dive right into what is fiber internet, what does fiber connection mean, and whether it’s the right fit for you.

If you’ve changed internet plans recently or tend to get a lot of flyers from internet service providers, you’ve likely heard of fiber internet.

But is it worth the hype? What is fiber optic internet, for that matter? We’ll discuss all of this and more. But if you’re looking for the quick answer, yes: it’s worth the hype.

What is Fiber Internet?

Even if your home’s internet connection is cable, DSL, or satellite, fiber is still the backbone of the internet as a whole and makes up the core of the internet. The biggest and fastest networks are linked together through fiber optic cables and top-of-the-line routers. The networks themselves are typically owned and operated by commercial, educational, government, or military groups and they create a stable foundation for internet service providers, content creators, and cloud providers. 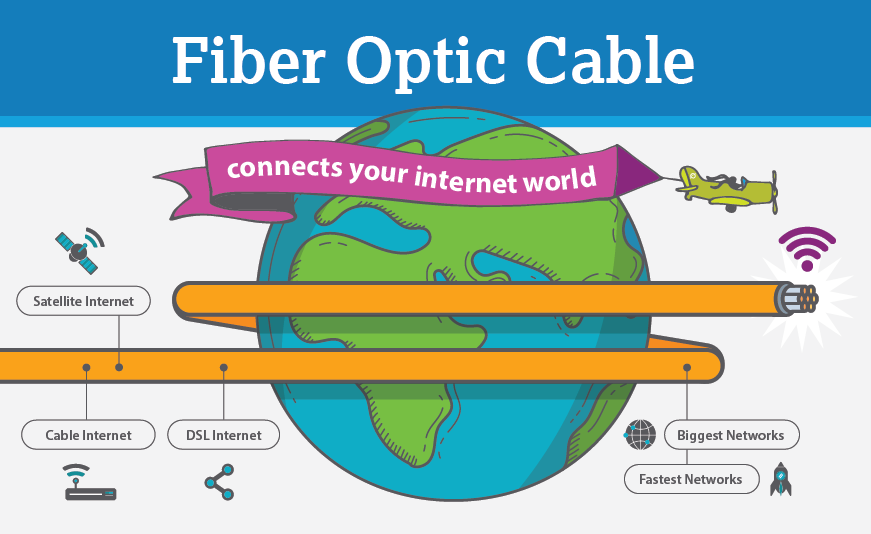 These cables are laid across the world — and even underwater — to keep everyone connected. Fiber cables are the ideal equipment for this job because they last longer, are less susceptible to damage, and can handle more data and faster speeds. They don’t need to be replaced as often as other types of wires.

The connection that comes to your home is known as “last-mile internet.” It’s what connects you to the rest of the web and impacts your speed. Last-mile internet gets complicated in more rural areas where the distance between residences can be significantly larger than in urban areas.

How Does Fiber Optic Internet Work?

You know the meaning of fiber internet and why it’s paving the way forward, but what is fiber optic connection, and how does it work?

Traditional cable internet, on the other hand, uses electricity to send information over copper wires. These wires use metal, which makes them more susceptible to interference from nearby high-voltage electrical equipment (like power lines) and weather disruptions.

So just how thin are the optical fibers? Slightly larger than a human hair. The fibers are bundled together to create fiber optic cables that carry the light signals we mentioned.

Interestingly, many providers are laying additional fiber optic cables while they’re building out the network. The lines that are not yet being used are often called “dark fiber” (“lit fiber” is the part that’s currently available for use) and will be available for future development. Already having these fiber optic internet cables will save time and money as the networks expand because companies won’t have to dig in the ground again to bury more wires.

Together, these fiber cables create fiber optic networks. There are a few fiber internet types, but each one begins with the cables running from the network hub to the curb near your home or straight to your home. The fastest type of fiber network (the one that gives you speeds up to 1 Gbps) is Fiber to the Home (FTTH). It’s a 100% fiber connection, so not a single part of your connection — from your home to the larger network — is slower.

There’s another type of network, called Fiber to the Curb (FTTC), which is a partial fiber connection. The fiber cables run to the curb near your home but copper cables connect your home to the nearby fiber network. This is more affordable for many internet service providers, especially in areas where houses are more spread out. If this is the type of fiber connection you have, you’ll still see increased speeds compared to having a 100% cable connection, but you won’t be able to enjoy speeds up to 1 Gbps, simply because the copper cables cannot handle that speed.

Curious to know if fiber internet is available in your area? Find out what internet options are available at your home or business. Call 8663833080.

For all you tech and history buffs out there, let’s take a quick look into the history of fiber optics.

It all started in 1840s France when scientists Jean-Daniel Colladon and Jacques Babinet discovered that light could be transmitted across streams of water using refraction. In the 1880s, William Wheeler invented a system of light pipes that could illuminate homes thanks to a highly reflective coating.

In 1930, Heinrich Lamm brought these two ideas together and discovered that he could transmit an image through a bundle of glass fibers. Progress continued to be made, and in 1970, a team of Corning Glass researchers (Robert Maurer, Donald Keck, and Peter Schultz) invented and patented the very first fiber optic wires made from fused silica. They found that these wires could carry 65,000x more information than copper wires.

By the 1990s, fiber optic cables were being laid around the world to create the incredibly vast fiber networks we have today.

Fiber internet has countless benefits, most notably its speed and reliability. Because fiber optic internet uses glass strands instead of copper wires, light can travel, well, at the speed of light. And because the glass strands use light instead of electricity, you don’t have to worry about fires or interferences from nearby power lines that can result in outages.

If increased speed and reliability aren’t enough to convince you, how about increased security? Fiber internet is more secure than other connections because it’s faster. The signals are harder to intercept and trying to tap into the lines will typically require breaking the glass, so any potential breaches will be quickly discovered.

So, if you’re wondering, is fiber internet safe? The answer is a resounding yes.

But if you’d like another level of protection, we recommend choosing a dark web protection package that offers a VPN so you can stay secure wherever you roam on the World Wide Web.

How Fast is Fiber Optic Internet?

Fiber internet tends to create buzz around its speeds. But how fast is it really? Well, you can get download speeds up to 5 Gigs (also known as 5,000 Mbps), although 1 Gig is more popular. Still, that’s blazing fast. For context, cable internet download speeds are typically between 10 Mbps and 500 Mbps. So even if you’re on the fastest cable plan, fiber is probably twice as fast.

In the past, upload speeds weren’t a big concern. The majority of real-time interacting was text-based, like AIM and email. Now, we’re using high-speed internet connections for activities like video chatting and live gaming, which require higher amounts of data. To avoid lags (and having to repeat yourself on calls), you’ll need faster upload speeds to send the data to a server and to the person on the other end. And our demand for high download speeds keeps increasing, too, as graphics become better and games become more competitive. Only fiber internet can offer extremely fast symmetrical speeds.

As if that wasn’t enough, fiber internet also uses a dedicated connection. In other words, your household is the only one using that connection to get online. Cable internet often uses a shared connection, which is quite literally shared among several households — sometimes even an entire neighborhood. This can lead to congestion and difficulty getting on the network if many other people are trying to access it at the same time.

Want to test how fast your internet connection is compared to fiber internet? Take our free online internet speed test.

Differences Between Fiber & Other Internet Types

Internet options abound. What makes fiber so different? You can read more about the best type of home internet, but we’ll give you the basics here.

What are Other Benefits of Fiber Internet?

We tend to think of the internet as being eco-friendly, especially as it’s cut down on the need to commute to offices for meetings and print paper. But it still takes a massive amount of energy and electricity to run all the necessary servers and keep everyone connected.

Copper cable wires wear down and deteriorate due to distance and use, and they’re typically replaced with fiber cables. While the transmitters and receivers that connect each end may need to be replaced and upgraded occasionally, new cables won’t need to be buried. That’s a win for your wallet and for the environment.

So really, what’s not to love about fiber internet? If you’re ready to find the plan that’s right for you, chat with one of our Internet Experts at 8663833080 today!

How To Know if You Need to Upgrade to Fiber Internet

If you’re dealing with painfully slow DSL, cable, or satellite internet, it may be time to switch to fiber internet. Use our free online internet speed test to determine how fast your current connection is and to see how it stacks up against EarthLink Fiber.

What does fiber mean on the internet?

What equipment is needed for fiber optic internet?

The great thing about fiber internet is that it requires very little equipment. All you need is access to fiber optic cables, an optical network terminal (ONT), and a fiber optic router.

What is the speed of fiber internet?

What fiber internet is available in my area?

Fiber internet is becoming increasingly prevalent across the United States. Check to see if there’s fiber internet near you.

What type of fiber optic cable is used for the internet?

What is dark fiber?

“Dark fiber” refers to fiber optic lines that have already been laid into the ground but are not currently in use. This allows companies to expand operations later, without having to add more lines.

How expensive is fiber optic internet?

Our fiber optic plans start at $49.95/month with no data caps — ever. Discover a plan that works for you today!

How is fiber optic internet installed?

Does fiber internet require a modem?

Fiber internet requires an optical network terminal or ONT, which is a type of modem specifically for fiber. It converts light signals into electrical signals so that your devices can make sense of those signals.

What is fiber WiFi?

Fiber internet is not wireless. It is a wired broadband connection that provides lightning-fast internet to your home or office.