Summary: Speed tests are one way to make sure you’re getting the internet speed your internet service provider has promised. But do they work? The short answer is yes, but we demystify how they work — and how to get the most accurate results — and what all those numbers mean.

If you’ve ever felt that your high-speed internet is running slowly, you’ve likely been told to try running a speed test. If you’ve ever wondered if they work, the short answer is yes.

The long answer is that there are a few different ways to get the most accurate results, and it’s important that you understand what the results mean.

Should I Run a Speed Test?

If you’re noticing a slow internet connection, it’s a good idea to run a speed test. If you aren’t sure what internet speed you’re paying for, check your latest bill from your internet service provider (ISP).

Keep in mind that ISPs guarantee speeds up to the speed on your plan. It doesn’t mean that you’ll experience those speeds 100% of the time. If your results and the advertised speed are close, great! Your internet should be at 95% (or higher) of the speed you signed up for. If it’s frequently slower than that, and you’ve already tried troubleshooting on your own, it might be time to call your ISP.

If you’re noticing a slower connection on just one computer or tablet, it might be a device-specific problem. Restarting it or installing a software update (if needed) could help. Connected to a VPN? That might be slowing your connection down, too. Try disconnecting or using another device to determine if the VPN is causing the slow speeds.

If you’re still noticing a slow connection on everything, now’s the time to run an internet speed test.

How Does a Speed Test Work?

Understanding how a speed test works will help you make sense of what to do with your results. First, the test finds a server close to you. The closer you are to the servers, the faster your connection will be because the data doesn’t have to travel as far.

Once a server is located, the test sends a signal, and the server responds. The roundtrip speed is measured and called a ping test.

Next, the speed test opens a few connections to that server to download a piece of data. It also measures how long it took to get the data, and how many resources were required.

If you’re still noticing a slow connection on everything, now’s the time to run an internet speed test.

After the download test, the process is reversed and data is uploaded from your computer to the server. These results indicate your upload speeds, or how quickly you can send data.

It might seem like a lot, but this all happens in less than a minute. Each test functions in the same basic way, but different speed tests use different servers — which is why you may see different results depending on the platform.

How Can I Get the Most Reliable Speed Test Results?

There are a few ways you can run your internet speed test, and each one will highlight a different aspect of your service.

Connect With An Ethernet Cord

If you want to see your speeds under the most ideal conditions, use a speed test offered by your internet service provider. Their tests are optimized for ideal conditions and use servers that are close to you and on their system. You can even connect your device to your router via an ethernet cable (remember those?) rather than using your WiFi connection. Because the ISP has nearby servers and you’re using ethernet instead of wireless internet, these results will show the best your service can do, but won’t be a good indicator of your actual speeds.

Don’t have an ethernet cord anymore? Generally speaking, the closer you physically are to your router, the faster your speeds will be.

Restarting your router before running a test will also help your internet to run faster. (This is also a good tip if slow speeds are a one-time problem.) Your router may have a built-in speed test, which will streamline the testing process. Again, your results from this type of test will likely demonstrate faster speeds than using a web-based test.

Use a Browser Test

While you can use an ethernet cord or a test through your router, browser tests are most commonly used. You can search for an internet speed test or use ours. Some providers suggest closing apps that could be using bandwidth (in other words, stop streaming your favorite movie while you run the test) to see your optimal speed. However, if you typically have one or two streams going, or have multiple devices being used simultaneously, we recommend keeping those on. Using your internet as you typically would when running the test gives you a better indication of your day-to-day speed. If you’re running a test, optimal speed is less important to know anyway — you want to know what you’re truly experiencing. 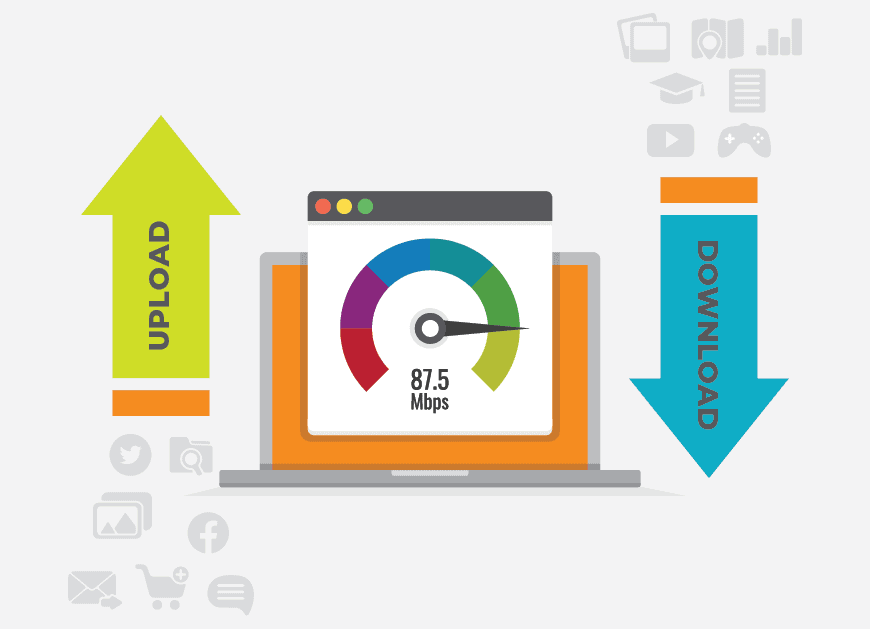 Move Around Your Home

Feel like your internet speed fluctuates based on what room you’re in or the time of day? Run the test again. Moving to a different room can help identify a potential dead zone, where WiFi cannot effectively reach. Need WiFi in all corners of your home? There are a few solutions you can self-install. If you’re noticing significant changes in speed depending on what time it is, run your speed test at several points during the day and compare.

If you’re a cable internet user, speed fluctuations throughout the day could be due to your shared connection — meaning that you and your neighbors all share one access point. Your internet speed will slow down as more people get connected throughout the day. Fiber internet, on the other hand, has a dedicated connection. That means it’s just your household using that access point, so your speeds aren’t affected even when you and the neighbors are streaming all three football games.

What Do My Internet Speed Test Results Mean?

So you’ve run the test — now you have to make sense of the results. While tests vary slightly in the information they detail, this is generally what you’ll see.

The test server shows the location that the speed test was run through. As we mentioned, the closer the server, the faster your internet. This goes for your everyday internet use, too. If you’re browsing sites that are hosted in other countries (like Vespa shops in Italy) you may notice pages take a few extra seconds to load compared to browsing shops in your area.

Your download speed is how much data can be downloaded from the server per second. Activities like streaming videos, online video conferencing, and gaming all require large amounts of data to be received and function better with higher download speeds. This is displayed as the most prominent number on your internet plan.

Using your internet as you typically would when running the test gives you a better indication of your day-to-day speed.

Your speed test results probably also include latency, or ping. This number describes how much time your device requires to send signals to a server and receive the response. This is basically a time delay or lag, so the lower the number is, the better.

Finally, some speed tests include results for retransmissions. These happen when the network is congested, and data (also called packets) gets dropped. Any dropped packets have to be re-sent. This number should be very low, but unless your retransmission rate is above 2%, you shouldn’t notice any service disruptions.

We hope this gives you a clearer picture of how an internet speed test works, why you want to do one, and what your results mean. You can choose what to do from here. If you’re looking for an internet service provider with high speeds, dedicated connections, and no internet data caps, EarthLink sounds like the fit for you.