Summary: Cryptocurrency is on a lot of people’s minds — and if the question on your mind is simply, “What is cryptocurrency?” or “Do I need to care about cryptocurrency?” — you’re not alone. We’re here to explain what it is, how it works, and what you can do with it.

Cryptocurrency has been around since 2009 but didn’t make it into the mainstream conversation until a few years ago. Even with all the buzz around it, many people are still confused about what cryptocurrency is, and how it affects (or should affect) their lives and financial endeavors.

And we get it. Financial decisions are difficult enough when you’re only worried about the U.S. dollar, much less what a new financial invention really means for you. Still, confusion doesn’t feel great either — so let’s dive in.

How Does Cryptocurrency Work?

Instead of using banks, the majority of cryptocurrencies are supported by blockchain technology, which keeps a tamper-resistant record of transactions and tracks who owns what. Blockchain is harder to hack and prevents people from making copies of their own holdings (which would allow them to spend the money twice or scam someone).

If you use or own cryptocurrency, you’ll have your own copy of the blockchain — that creates a unified transaction software that gets automatically updated with every change. Because it’s stored across so many different accounts, it’s harder to hack, so many people view it as safer and more secure. 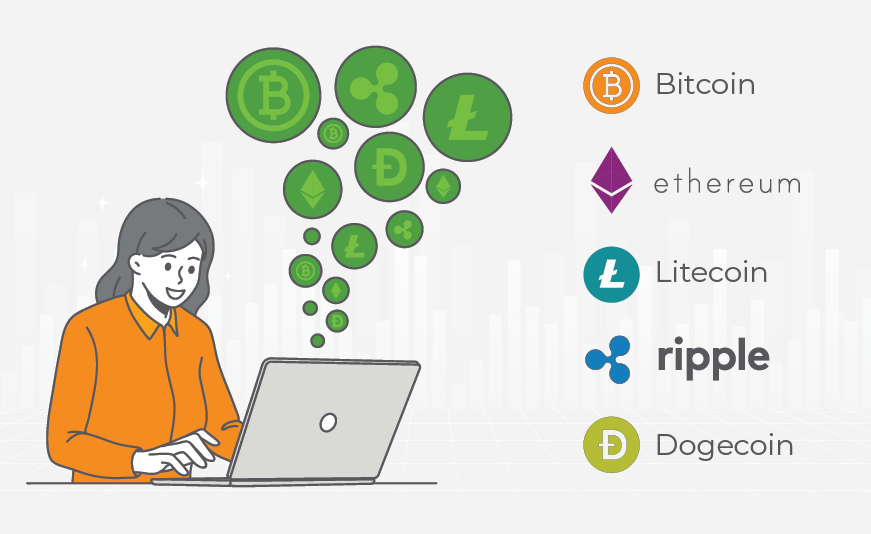 To better prevent fraud, every single transaction gets checked in one of two ways: proof of work or proof of stake.

Proof of Work vs. Proof of Stake: What’s the Difference?

Both methods can be used to verify transactions before they’re confirmed and added to the blockchain, but there are some major differences.

Proof of work uses an algorithm to provide a math problem that computers compete to solve. This is often referred to as mining cryptocurrency. Once that problem is solved, the group of transactions is moved to the blockchain ledger and the miner is rewarded with some cryptocurrency as well. However, mining requires a significant amount of computer power, electricity, and overall energy, so this isn’t a sure-fire way to make a profit.

Wondering just how much energy is considered significant? According to Forbes, it’s estimated that .21% of all the electricity in the world goes to powering Bitcoin farms. That’s roughly the same amount of power that the entire country of Switzerland uses in a year. And most miners use up to 80% of what they earn to cover their electricity costs.

On the other hand, proof of stake requires crypto owners to “stake” a certain amount of their cryptocurrency to participate in verifying transactions. The more money you’re willing to stake, the better chance you have to verify (and in turn, be rewarded with more cryptocurrency of your own). If you’re chosen and verify invalid transactions, you’ll forfeit at least part of what you staked. But, because proof of stake is less energy-intensive, transaction verifications don’t take as long, so many users prefer this method.

How Can You Use Cryptocurrency?

If you’re a crypto owner, the good news is that you can use it in more ways than ever before. While it’s still not accepted everywhere, certain online retailers allow it (including Microsoft, PayPal, Overstock, and Twitch), or you can exchange cryptocurrency for gift cards to your favorite retailers on sites like eGifter.

Others view cryptocurrency as another type of investment, similar to stocks and bonds, since its value fluctuates over time. But keep in mind: you’ll pay taxes on any capital gains you make just like you pay for stocks and bonds.

What Types of Cryptocurrencies Are Available?

Cryptocurrency is a broad term and there are multiple types of cryptocurrencies to choose from. We’ll break down the basic options, but for more information you can visit coinmarketcap.com, a market research website that examines the 18,000 (or more!) cryptocurrencies available to the public.

Whatever type of investment you’re looking to make, chances are there’s a cryptocurrency out there. While Bitcoin continues to be the most talked about — and worth the most — there are tons of options, so be sure to do your research before diving in.

What Internet Speed Do I Need to Use Cryptocurrencies?

If you’re just wanting to use cryptocurrency — or dig around on the web to find out more about them — you don’t require a certain type of internet. Our general recommendation is that households who enjoy videoconferencing or streaming (but not simultaneously), 50 Mbps is probably enough. But for households who consider the internet essential to their daily lives — or who like to connect to multiple high-data activities at the same time (streaming on one screen while gaming on another, anyone?) — speeds of 100 Mbps or more will probably be necessary.

For mining cryptocurrency, you don’t need speeds of 1 Gig. In fact, 100 Mbps is probably just fine. But you will want a reliable connection and low latency. In other words: fiber internet is still your best option. If you’re in an area that doesn’t offer fiber internet, a newer technology like wireless home internet could be better suited for crypto mining than satellite or DSL. Pro tip: make sure to choose a higher data plan.

Not sure what speed you need? You can use a handy bandwidth calculator for an estimate or call one of our Internet Experts at 866-383-3080 for a more personalized suggestion.

What’s the Cryptocurrency Executive Order About?

This spring, President Biden signed an executive order regarding cryptocurrency. While it doesn’t change how the U.S. approaches cryptocurrency right now, it will start the process of creating regulations for all cryptocurrencies. This includes digging into problems that crypto creates as it becomes a more popular option and creating rules to regulate how it can be used as well as how it could boost the economy.

Advocates are viewing this order as a sign that the federal government sees crypto as a legitimate part of the economy moving forward, not an off-the-wall idea that won’t gain traction. A lot is still unknown, but this order is a sign that things in the crypto world are progressing.

Whether you’re trying to do some online research hunting for a pot of crypto or you’re ready to start mining for crypto, a reliable, high-speed internet connection is essential to your plans. Choose a provider with no credit checks, the best nationwide coverage, and no fiber internet data caps. Happy hunting!