Summary: Wireless home internet is a dependable option for rural residents who want great internet service. It uses cell towers, rather than satellites or underground wires, to create a WiFi network almost anywhere. Plus, the installation process for wireless home internet is pretty simple, and the equipment is affordable. We break down how this internet works and why it might be a better option for you than satellite internet or a cell phone’s hotspot.

You’ve heard of satellite, cable, and fiber internet. You know how to use your home WiFi network to stay connected to friends and family. But what the heck is wireless home internet?

It’s one of the most recent internet service types, and it has the potential to reach traditionally underserved areas (like rural or exurban locales). It’s also more flexible than many other internet types and comes with easy self-installation, but there are limitations. In fact, if you’re in an area where fast fiber internet is available, you should probably stick with that. But let’s dig in, and take a look.

How Does Wireless Home Internet Work?

Wireless internet uses cell towers to create a WiFi network that your devices connect to. You may have also heard it called mobile broadband internet.

In some ways, it’s similar to a hotspot: it uses cell towers, requires a data plan, and has a monthly maximum. But in other ways, it’s way better than your phone’s hotspot.

Wireless home internet networks can support up to 64 devices at once. The very best hotspots can only manage 10 devices — and the average American household has 11.

Plus, it won’t burn through your phone battery.

Wireless internet is also likely to be a much faster connection since cell phone speeds are usually only around 30 Mbps when connected to a cell tower. But wireless internet devices allow speeds more than triple that — up to 100 Mbps, depending on the nearby towers. And it’s those towers that really dictate the speed you can get since these devices automatically connect to the best signal available, which is why these devices often do best near a window. So you can be confident you’re always getting the fastest possible speed.

If you’re thinking that wireless sounds similar to satellite internet, you’re not far off base. But wireless home internet is largely considered better than satellite. Here’s why: 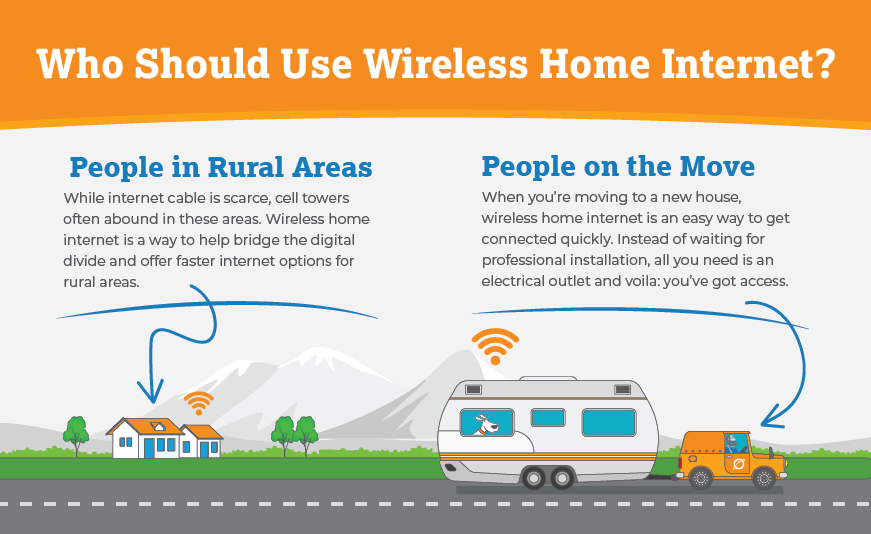 What Can Wireless Home Internet be Used For?

Wireless internet can really be used for any function of the internet, whether it’s checking emails, gaming, streaming, or videoconferencing. Because the lag times can be much shorter than satellite internet, you don’t have to worry about in-game delays or corrupted audio during calls. But there are differences between this kind of internet and cable or fiber internet, like stricter data limits.

Many high-speed internet providers enforce data caps, which are a restriction on the amount of data you can send and receive online. While the data limit on traditional internet varies, many providers offer up to 1 Terabyte, which is typically more than sufficient for one household.

Wireless home internet, on the other hand, often has a variety of data plans to choose from, ranging from 50 GB to 150 GB per month. Just like choosing a mobile phone data plan, it will be important to consider what types of activities you’ll be using your mobile broadband internet for.

While surfing the web and checking email won’t require a significant amount of data, more visual or interactive activities — such as live gaming and videoconferencing — will use up data more quickly. And, of course, as the number of people in your home on the device increases, the amount of necessary data increases, too.

Who Should Use Wireless Internet?

So you know what wireless home internet can be used for. But who should actually use it?

People in Underserved or Rural Areas

Internet access in rural areas has been a challenge almost since the beginning. It’s expensive to lay cables, so most providers have to choose where more people will benefit from adding new technology and services. It can mean that residents of less-populous areas have limited internet options, usually choosing between satellite internet and dial-up or DSL. Satellite offers higher speeds than DSL internet but requires pricey equipment to get connected and can be slow.

While internet cable is scarce, cell towers often abound in these areas. Wireless home internet is a way to help bridge the digital divide and offer faster internet options for rural areas. And, since it doesn’t require satellite equipment, it’s easier and more affordable to install.

Whether you’re moving to a new house, spending a few weeks at your remote getaway, or just ready for better internet, when you’re in an area with coverage all you need is an electrical outlet and voilà: you’ve got internet access. All engines, go!

Wireless internet is an important step in getting reliable internet access to hard-to-reach, rural areas and making a huge difference for remote workers. With the ease and flexibility of a cell phone’s hotspot, but the support of a wired connection, this could be the solution you’re looking for.