Home › Blog › Is Satellite Internet a Good Option for You?

Summary: Satellite internet is available virtually everywhere in the country, but it’s still got a bad reputation. Did you know that satellite internet offers speeds up to 100 Mbps? Or that it takes less than one second for your data to make it to outer space and back? Learn what else satellite has to offer.

If you live in a rural area, chances are you know what satellite internet is. But if you’ve never used it, you might associate satellite with TV subscriptions. So let us break it down for you.

How Does Satellite Internet Work?

Satellite internet creates an internet connection in your home by using satellites that orbit the Earth. Other types of internet, like fiber or DSL, use wires that are buried underground. Because the data has to travel so far for satellite internet, there are several steps to this process.

Whew! That’s quite a journey any time you want to get online. However, this only takes about half a second. Sounds out of this world, right? 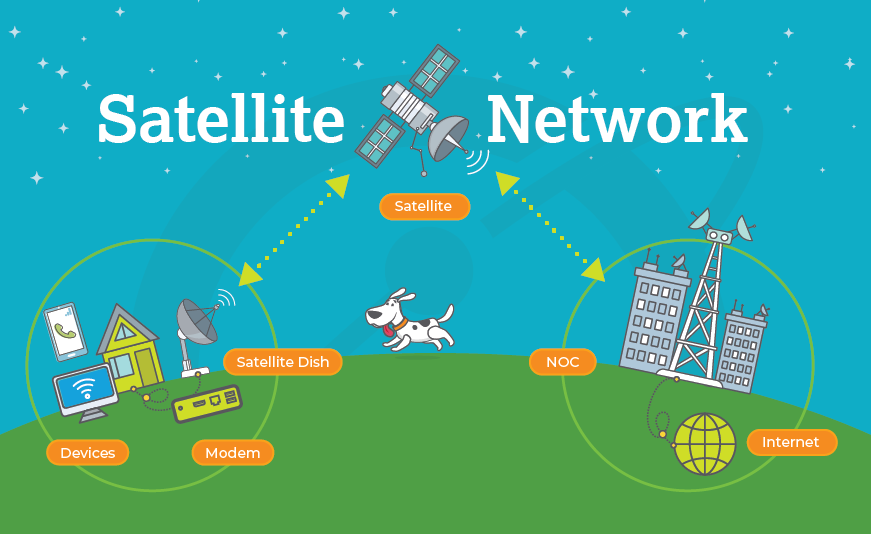 Because satellite internet doesn’t rely on underground wires being laid, it’s available in virtually 100% of the United States. As long as your residence has a clear view of the sky, satellite internet will probably work for you. That said, depending on where you live, it might not be your best option. Let’s look at the pros and cons of satellite internet.

Pros and Cons of Satellite Internet

So, if you’re accustomed to using your phone’s hotspot at home, satellite is definitely the way to go. That said, there are some disadvantages to satellite internet, like:

If fiber internet is available at your home, that’s always what you should go with — especially if you can find a high-speed internet provider with no data caps and no credit checks. But satellite does offer faster speeds comparable to cable and broadband internet, so you won’t feel stranded.

Who Should Use Satellite Internet?

Now that you know the pros and cons of satellite internet, who should be using it?

Satellite is ideal for people in rural areas (or internet deserts) that have limited or no cable or fiber connections. Areas without wired internet are the perfect candidates for satellite internet because all you need is a clear view of the sky.

Satellite internet is also great for customers in regions that are prone to natural disasters, like earthquakes and hurricanes. These types of disasters can sever underground wires, which can take a long time to fix. But as long as your satellite dish is working, you’ll be able to stay online (or quickly reconnect to the web).

What Should I Look for in a Satellite Internet Provider?

If satellite internet sounds like a good fit for your life, here are the top three things to consider.

First, what speed do you need? Different providers offer different speeds. If you tend to use the internet for data-heavy activities, like streaming, gaming, or videoconferencing, you’ll need more speed than someone who is simply checking their email or doing some light online shopping.

Second, what data limit do you need? You should be able to view your current monthly data usage on your internet provider’s statement if you need a rough estimate. Those data-heavy activities that influence your speed? They also take more data and will contribute to your data cap. If you’re worried about speed throttling or fees, you can take steps like streaming in HD instead of 4K (or SD instead of HD) to use less data.

Finally, are you planning to move soon? Many satellite internet providers require multi-year contracts, and the initial installation of the dish equipment can be costly. If you frequently move — or are planning to soon — it’s worth considering other options or asking about early termination fees.

Satellite internet has come a long way, and some providers even offer speeds up to 100 Mbps. It’s one of the best options for rural internet users and is the most widely available type of connection in the country. No matter what internet is best for you, EarthLink can help. From satellite internet to fiber, we’ve got the solution you need. Learn more about our rural internet options or get in touch with one of our Internet Experts today at 8663833080.