Home › Blog › Moving Season Has Arrived. Is Your Internet Fast Enough to Keep Up?

Summary: Moving season is starting up all over the country. And with a red-hot housing market, you’ll want internet fast enough to keep up with the search (and everything else). We’ve got the latest on where people are moving, the best cities for fiber internet, and how to find what’s available at your new place.

Temperatures are heating up, humidity (and our hair) is on the rise, school is out, and moving trucks are popping up on streets all across the country.

But who’s packing up? And where is everyone going? Let’s find out.

Top 10 States to Move To

While fewer people moved last year, many states that were popular last year continued to be top spots for movers. According to move.org, the top 10 states to move to were:

More than half of Americans — 67 percent, to be exact — say that internet availability in a new area affects their decision to move there. And with remote work being more popular than ever, who can blame them? If you’re looking for a new view but don’t want to leave your fiber internet behind, here are the top three spots to consider:

If none of those strike your fancy, you can check out the top 10 cities for fiber internet for more inspiration.

How fast are homes selling?

Feel like all of your Zillow favorites are being bought out from under you? You’re not alone. According to Fortune, the average home listing finds a buyer in just one week. If you’re house hunting, you need internet that can keep up with your home search. 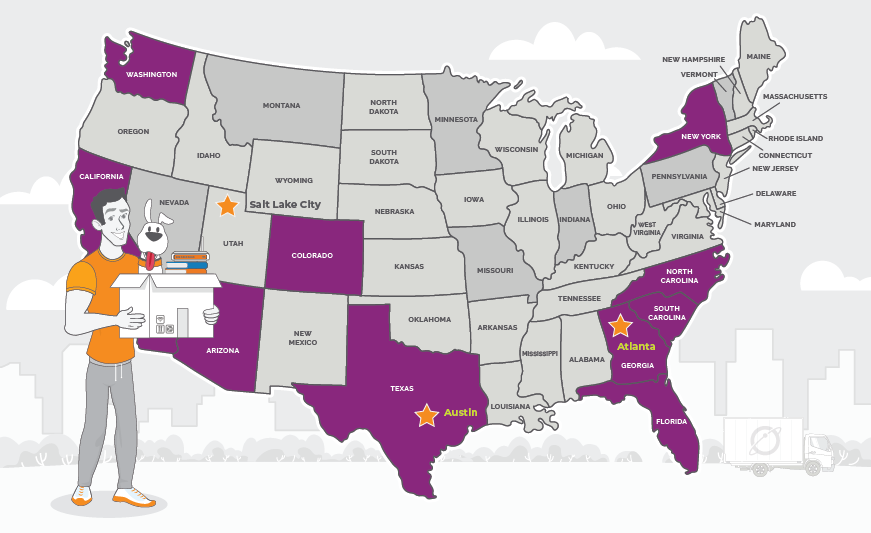 EarthLink Fiber Internet offers speeds up to 5 Gigs — that’s enough speed to email your realtor, chat with your lender, take a virtual home tour, and make an offer, even if you’re streaming your favorite comfort show in the background. (Great British Bakeoff, anyone?)

How Far Did Most People Move?

Regardless of how far you move, you still have to load everything into that truck… and go through several rolls of packing tape. But most people aren’t putting as many miles on as you may think.

But we get it — even if you stay in the same zip code, you’ll still have to set up new internet service (along with a lot of other stuff).

How Can I Find Internet Access at My New House?

Wondering how you can find out what internet plans are available at your new (or potential) property? You can always use a serviceability checker to determine what internet is available near you. But remember: entering an address will give you more accurate results than just entering a zip code. Coverage can change from block to block, so the more specific, the better.

Or, you can ask the sellers (or their agent) what internet speed they have, or if they’re able to work from home and stream.

Looking to buy in an area that primarily relies on satellite internet? You may be a good fit for wireless home internet, which offers more reliable service than satellite and faster speeds than DSL. It uses nearby cell phone towers to create a network in your home. Cool, right? Plus, it’s cheaper than most satellite internet plans and it’s easy to self-install.

If you’re ready to learn more about high-speed internet options near you, give our Internet Experts a call at 866-383-3080. They can help find the right plan for your life, budget, and location. And who doesn’t love checking something off of their moving list?