Home › Blog › Welcome to the Low-Touch Economy. Here’s Why You Need High-Speed Internet.

Summary: Our payments are moving online (and to our phones) more than ever before. While that means you’ve got more options than ever before, it also means your internet — and cell phone plan — need to keep up.

Tech was already a major part of our lives, but COVID-19 changed the internet and has certainly accelerated the adoption of digital-first approaches — including what some experts are calling a low-touch economy.

The low-touch economy refers to the way businesses have adapted to respond to the pandemic. In practice, this often looks like cashless payments, an increase in online ordering and delivery, virtual meetings, and an increase in telecommuting. In other words, it’s literally moving from touch to contactless services and transactions.

Along with this shift, we’ve seen an increased demand for widely available (and affordable) high-speed internet and mobile service.

Let’s dig into what the transition to a low-touch economy has looked like, if it’s here to stay, and why internet connection matters so much.

What is the Low-Touch Economy?

As we mentioned earlier, it’s a way of describing the shift that businesses have made in response to COVID-19. But most of these changes were happening anyways — they’ve simply been accelerated. According to the Board of Innovation, it’s characterized by low-touch interactions, health and safety measures, new social behaviors, and lasting industry shifts. 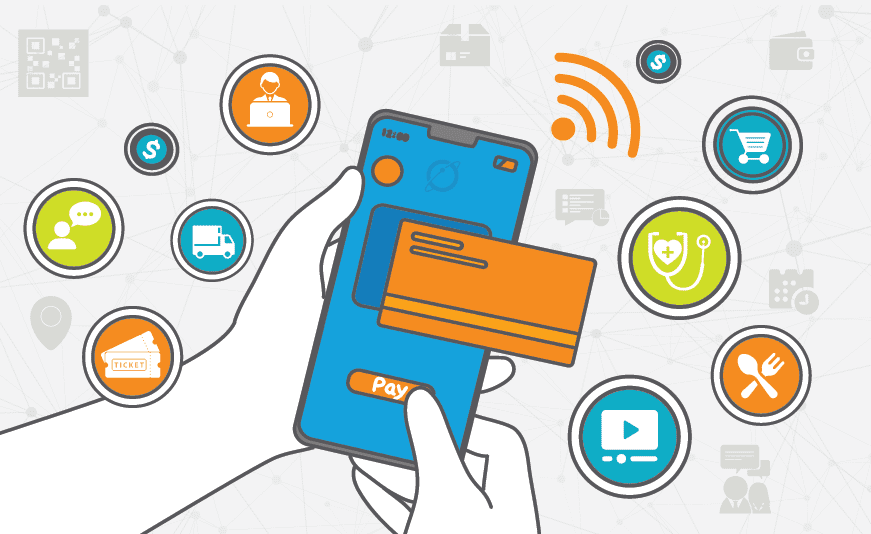 This has implications for everything from social distancing requirements on factory floors to the rise of telehealth appointments to new (or newly popular) platforms like Instacart and Shopify. Many of the new businesses are taking a service approach (like delivery) to products (such as groceries) to increase convenience for buyers.

What are Examples of Low-Touch Economy?

As you’ve probably noticed, this trend touches a lot of different sectors. So while it would be nearly impossible to cover each one, we’ll offer some examples here. Have you used any of these platforms in your own life?

In the United States, the restaurant delivery market had historically grown by 7 to 8 percent each year. During the COVID-19 pandemic, it has more than doubled, according to McKinsey and Company. While this has raised questions around which party should be shouldering the majority of the fees, it’s clear that customers are enjoying the ease of ordering and paying online.

But dependence on tech and in-home experiences isn’t limited to dining. The number of telehealth appointments has stabilized at 38 times higher than it was prior to March 2020, according to McKinsey and Company. While that is lower than the initial peak in Spring 2020, it’s a rapid and significant jump. Telehealth appointments require video chat in addition to voice, so users need a faster internet connection to avoid delays or dropped calls.

Of course, consumers have to pay for these services — but even in-store purchases can be paid for virtually, with digital wallets. A digital wallet is a way to electronically store credit card or bank information and use that to pay. Apps like Apple Pay, Google Pay, and even Venmo and PayPal are some examples of a digital or mobile wallet. According to Square, in-store mobile payments saw 29 percent year-over-year growth in 2020 and reached an estimated 101.2 million Americans over the age of 14 in 2021.

Is the Low-Touch Economy Going to Last?

If there’s one thing we’ve learned, it’s that making any long-term predictions is a gamble. But it seems like this trend isn’t going away any time soon.

According to McKinsey, 82 percent of Americans used digital payments in 2021, an increase from 78 percent in 2020 and 72 percent in 2016. People aged 18 to 34 are three times more likely to use in-app payments than those over age 55. Right now, digital in-store payments have the lowest number of users – but as mobile wallets gain popularity, that could change, too.

The bottom line is this: while the way we make payments could change, low-touch options are here to stay. What does that mean for you?

Why You Need High-Speed Internet

If you’re going to be making payments (and purchases!) online, you’re going to need high-speed internet to keep up. Otherwise, you run the risk of shopping carts that lag, payments that won’t process, or sales that disappear before your eyes.

Our top recommendation? Fiber internet. It’s the fastest internet available, so it can support all your online shopping needs (plus, it’s a must for any 5G devices). If you’re in an area that doesn’t have fiber available yet, check out wireless home internet. It’s the latest option for rural areas and it’s more reliable (and easier to install) than satellite.