Home › Blog › How to Tell if Your Internet is Being Throttled

Nobody likes slow internet speeds, but a slow connection can indicate a few different problems. Sometimes, restarting your modem and router can solve the issues and you’re back online in no time. But when it’s more involved than that, it could mean your internet service provider (ISP) is purposely slowing down your connection, also known as speed throttling.

What is internet throttling?

Internet throttling — also known as speed or bandwidth throttling — is when your internet service provider (ISP) intentionally limits the bandwidth of your connection. That typically means that you’re experiencing slower speeds, pages that won’t load, and lots of frustration.

Why do ISPs throttle your internet?

There are a few different reasons you might experience speed throttling from your internet provider. Based on when you’re experiencing slower speeds, you’ll probably know which reason is impacting you.

First, you might have slower speeds thanks to data caps. A data cap is a limit on how much data you can send over your home internet. It’s not necessarily about how much time you’re spending online, but it’s how much information you’re sending or receiving.

If you reach your limit, your internet provider can reduce your bandwidth (giving you slower speeds) and limit your access until the next billing period starts — or charge you fees to access more data. You might think it’s tough to reach a data limit, but it’s easier than ever. Things like Ultra HD or 4K streaming require more data than SD, and any video conferences or live gaming also require a considerable amount. With graphics improving and more of our lives moving online, our connections require more data than ever. 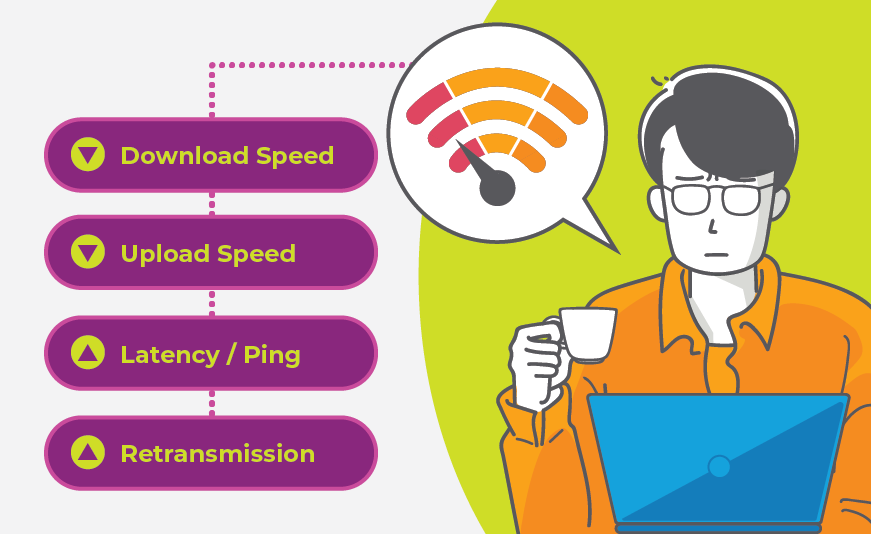 Most ISPs offer a way to monitor your data usage throughout the month (like with an app) so that you can make adjustments along the way. But you can also choose a fiber internet provider that has no data caps. That way, you’ll never have to worry about grainy graphics or overage charges.

If your internet provider doesn’t have data caps (or you know you haven’t reached it), you could also be experiencing slower speeds thanks to a congested network. This is particularly common for cable internet users because cable internet has a shared connection. In other words, multiple households (think: everyone in your apartment building or complex, your neighbors, or the store next door) are using the same on-ramp to the internet highway. It’s slower for everyone to get online and is often slower even once you’re connected.

Historically, this was the most common during “peak usage hours” — like lunchtime or in the early evenings. But now, peak usage can be at any time of day (or for most of the day). With the rise in telecommuting, online classes, telehealth appointments, gaming, and the pervasiveness of streaming, it’s a lot harder to predict when network congestion will happen.

In addition to the congestion itself, sometimes internet providers will slow down connections to help more people get online. So if you tend to notice slowdowns during the same time of day every day, there’s a good chance you’re experiencing throttling due to network congestion.

This one is slightly more complicated. Paid prioritization is something that can happen without net neutrality. In 2015, net neutrality guidelines were updated and the common-carrier status was dropped for broadband providers. It also removed restrictions around blocking or throttling content.

That means that internet providers can prioritize some sites (such as ones they own) and make it harder to access others. While paid prioritization can be a problem, the Federal Trade Commission (FTC) is currently reviewing net neutrality laws, so things could change.

How to Tell if Your Internet is Being Throttled

So now that you know why some internet providers slow your speeds, here’s how to tell if your internet is being throttled. Just follow these four easy steps.

First, run an internet speed test. Your results will show:

Either take a screenshot of these numbers or keep your tab open, we’ll come back to this.

Next, connect to a virtual private network (VPN) and run the speed test again. Don’t have a VPN? We suggest choosing a cyber safety package that includes one, as it’s one of the best ways to stay safer online.

Once you’ve run both tests, compare the results to each other. Because a VPN can work around some data caps, this will help answer the question, “is my internet being throttled?” Compared to a standard internet connection, a VPN connection will be slightly slower. If your VPN is showing faster speeds, you’re probably being throttled on your standard connection.

Finally, compare your first test results to the advertised speeds on your internet plan. While your ISP guarantees speeds up to the speed on your plan, you should be experiencing speeds at 95% (or higher) of the speed you signed up for. If you’re consistently slower than that, it’s time to call your provider.

How do you fix data throttling?

If you’re experiencing bandwidth throttling, there are three main ways to fix the problem.

First, monitor your data usage. You can typically view this information in your internet provider’s app or online customer portal. But you can also reduce usage by streaming less, streaming in standard definition (instead of HD or 4K), and joining work calls with audio-only.

Next, use a VPN. Because a VPN hides your IP address and destination, your internet provider can’t necessarily track your previous activity or regulate where you’re going. If you’re experience throttling, a VPN can get you closer to typical speeds.

Finally, you can switch to an ISP with no data caps. That way, you can enjoy a high-speed fiber internet connection without any interruptions to your daily life.

Why is my internet slow if it isn’t being throttled?

So you’ve run our internet throttling test and you’re not being throttled, but your internet is still slow. There are a few reasons for that, including blocked WiFi signals and too many devices on your network. First, try turning your modem off and then back on. If that doesn’t solve the problem, try moving your modem to a different area.

Still slow? It might be time to upgrade to better high-speed internet options. You can find fiber internet with no data caps from EarthLink.

With all of this in mind, is internet throttling even legal? The short answer is yes. ISP throttling is legal as long as the provider makes customers aware of it (typically within the fine print details). So even though you never explicitly opted in, by using the service and agreeing to the terms and conditions, you’ve agreed to internet throttling.

Like we mentioned earlier, net neutrality is loosely related to internet throttling, so as the procedures for that change, your experience with ISP rules and limits could change, too.

If you’re still with us, well done! You’re now an expert at how to tell if your internet is being throttled. If internet is essential to your life, you should have a provider who understands that and offers high-speed internet with no data caps and no speed throttling. With the biggest internet network in the country, EarthLink has your back. Learn more about our home internet or call our Internet Experts at 8663833080 today to get started.