Summary: If you’re considering moving — or you’re just looking for the easiest way to get online — the internet connections available near you are an important consideration. Good news if you’re in a more densely-populated area: you probably have multiple options. So let’s compare DSL, cable, and fiber internet options to find the best fit for you.

For most Americans, internet availability is a major consideration when moving. Internet options can look a lot different depending on where you live — especially when considering urban versus rural internet options.

For those of you in a city or a suburb, there are three main internet options: DSL, cable, and satellite. So let’s take a look at the options, and explore the similarities and the differences.

In other words, it works for basic internet functions like emailing, browsing, and shopping, but you might run into issues when trying to do more than that, like streaming or making a video call. 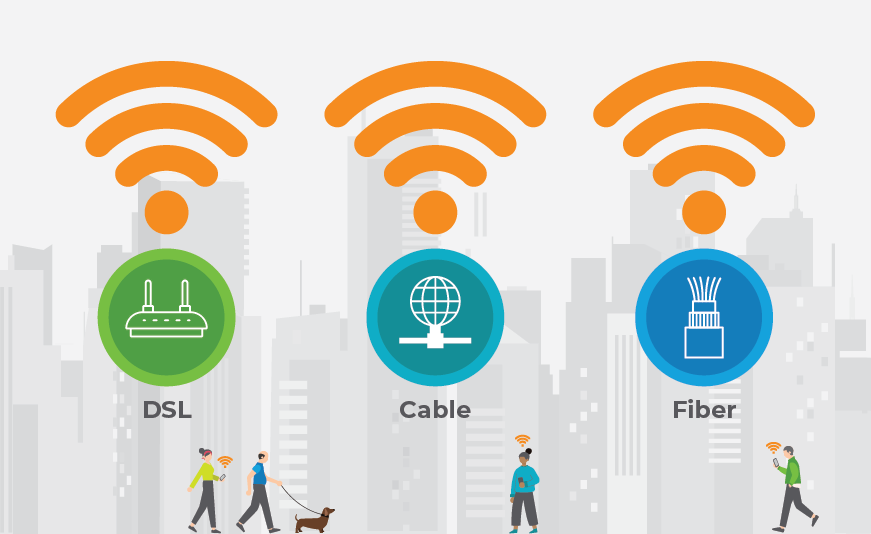 The upside of DSL? It’s available across 90% of the country (including rural areas), it’s generally affordable, and meets the basic needs. So, if you’re not online all day every day — or tend to use the internet mainly while you’re away from home, like at the office — DSL might be the right fit for you.

There are some reasons that DSL might not work for you, though. Speeds can vary depending on how geographically close you are to your internet provider and slower speeds make it less reliable for activities like video calling, streaming, or playing games.

Cable internet was the highest-speed option for a long time. It also ushered in the era of bundling your internet and TV together. That felt easy because it’s delivered via the same physical copper line as cable TV service. But that also means that you can experience slower speeds because you share the lines with your neighbors.

As cable internet has started to be replaced by fiber internet, more and more people have begun cutting the cord and opting out of cable TV, choosing streaming (or a combination of streaming platforms) instead.

Cable internet can be a good option because it’s widely available and can handle data-intensive activities, like gaming or streaming videos. Cable internet plans typically offer a range of speeds, so you can probably find something to fit your lifestyle.

On the other hand, cable internet has some flaws. Neighborhoods share bandwidth (known as a shared connection), so you might see slower speeds during peak times. And while peak times used to be a short window after dinner, we’re all online more than ever. So your workdays, class times, movie nights, and more could be interrupted. It’s like when everyone is trying to use the same on-ramp to the highway — you’ll have to be patient with delays and lags. Download speeds are faster than upload speeds (known as an asymmetrical connection), making it easier to stream videos but difficult to upload videos or email large attachments.

For most people, cable internet will be a better fit than DSL because it can handle things like working or schooling from home, gaming, and telehealth appointments. But there’s something even better available.

Enter: fiber internet, the (current) gold standard in speed and security. It uses fiber-optic cables (really thin strands of glass) to send data faster than standard copper cable. In fact, fiber internet sends data as light signals — so you have full permission to say your internet is as fast as the speed of light.

Plus, fiber internet uses dedicated lines, which mean you benefit from more consistent (and higher) speeds, even if all of your neighbors are online at the same time, too. It also has symmetrical download and upload speeds and is less likely to go down during a power outage because there’s no electricity involved in the lines.

If fiber internet is great for streaming, gaming, schooling, and more — and offers the fastest speeds on the market — are there any negatives? Fiber isn’t available everywhere — yet. That is changing as internet providers expand their options and coverage with the passing of the broadband internet infrastructure bill. If your household has fiber as an internet option, that will always be our recommendation for the highest speeds and best experience.

And since the average American spends about 12 hours a day looking at some type of screen, think how much time having a faster internet connection could save you. That’s a win-win.

If you live in a more densely-populated area where fiber internet is available, that’s most likely the right connection for your household. But if screen time isn’t a big part of your life or logging on is something you do occasionally, you also have options like cable or DSL internet.

Whatever internet connection is right for you, EarthLink can help you find it. Learn more about home internet options today or get in touch with one of our Internet Experts at 8663833080.