Summary: With tons of options, what type of internet gives you the best internet service? We examine your choices — from fiber to satellite to wireless to cable — to determine which one takes the prize.

Access to high-speed internet has become a necessity — in both our professional and personal lives. However, there are many different options when it comes to choosing the type of internet you have in your home, and each offers its own variety of advantages, disadvantages, and price points.

Fiber is the current gold standard for high-speed internet. This type of internet service runs along a dedicated line (unlike cable) which offers higher speeds and less interference. The fibers are made of thin glass strands and conduct light instead of electricity.

As an added bonus, fiber is actually a cheaper long-term alternative to cable internet. When copper cable wires wear down, thanks to distance and use, they need to be replaced. Most repairs to old cable lines are now being done with fiber. Fiber internet lines are far sturdier and are less prone to natural disasters or fires since they don’t conduct electricity. While the transmitters and receivers may need to be replaced and upgraded from time to time, no new cable will have to be buried.

Fiber is the current gold standard for high-speed internet.

Fiber internet is a more sustainable, easily-upgraded way to access high-speed internet, meaning companies and users will save money in the long run.

Cable internet is one of the more common types of high-speed internet. It offers faster speeds than its predecessors and is delivered via the same physical copper cable line as cable TV service, which is why bundles can be popular with cable ISPs. It also means cable can be slower since you share the lines with your neighbors.

Rumors about 5G internet service and speeds abound, and while the tech is promising, the reality is yet to be seen. 5G functions like other cell networks, which use radio waves to send encoded data. 5G uses the same basic process as 4G, but the encoding is more efficient, allowing speeds that are about 30 percent higher. As with fiber internet, 5G will be available in large cities first before becoming more widely available. 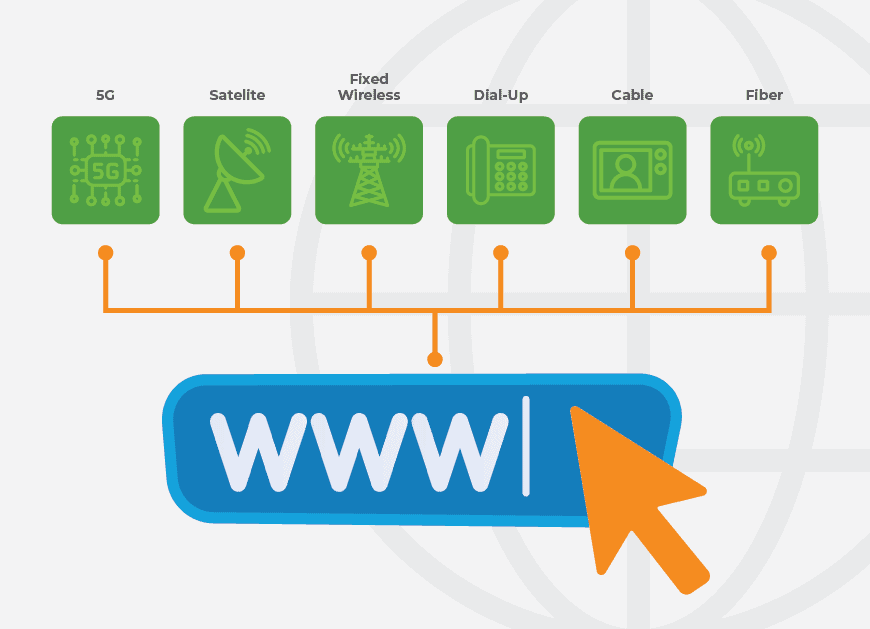 Satellite internet functions much the same way that satellite TV does — including occasional outages due to storms. A dish positioned on or near your home sends and receives signals from your internet service provider via a satellite that orbits Earth. Satellite can be a good option if you’re in a remote area where fiber isn’t yet available.

Wireless home internet comes from the same wireless towers that allow you to use LTE on your cell phone to make calls, send texts, and browse the web. This type of internet is more common in rural areas where other types of internet access is limited, but cell towers are plentiful.

Also commonly referred to as broadband internet, DSL stands for digital subscriber line. Its speeds land somewhere between dial-up and cable internet. DSL works well for the basic functions of the internet like emailing, browsing, and shopping, but may struggle if asked to do much more than that.

Yes, dial-up internet does still exist. A handful of internet service providers do still offer it — it runs on a telephone landline, so it’s one way to get the web to rural areas. But given the speed constraints, it’s not an ideal solution if you need to stream or video call

There are many options when it comes to home internet service, but fiber offers the most for users. As rollout continues, expect fiber internet to become the most popular type of service. See if fiber internet is available near you, and find your best fit.